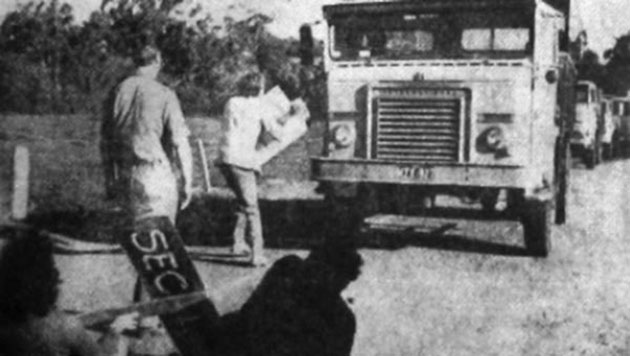 Workers in Victoria’s Latrobe Valley showed their clout when they shut down the power, writes Tom Orsag, but the support they needed to win was never mobilised

When 2300 maintenance workers in Victoria’s power stations went on strike in August 1977, they knew they were in for a fight.

The Liberals’ Malcolm Fraser had been installed as Prime Minister in November 1975 after Gough Whitlam’s sacking. He aimed to take on the unions and restore the profits of Australia’s bosses.

The profit share of the economy had fallen from a traditional 13-15 per cent in the 1960s to 10 per cent by the early 1970s, as workers staged a record strike wave and pushed for higher wages.

Fraser’s first major attack was to destroy Medibank, the precursor to Medicare and one of Whitlam’s key reforms, despite a one-day national general strike in June 1976.

He then used an interventionist Arbitration Commission, the equivalent of today’s Fair Work Commission, to hold down wage rises. One by one, some of the strongest unions challenged these “wage indexation” guidelines, but failed to win higher pay rises.

The government wanted to make an example of a group of workers and inflict a serious defeat. It chose the Latrobe Valley power workers.

While the power workers’ pay claim was large, it was undeniably just. They were $20 a week behind their NSW and Queensland counterparts. And they were $40-$60 behind the same workers in private companies.

Worst off were the trades assistants. Some took home just $109 a week—five dollars below the poverty line for a two-child family.

Maintenance workers lodged a log of claims with their employer, the State Electricity Commission (SEC), in late March. With the state government under Liberal Premier Dick Hamer behind it, the SEC refused to negotiate.

Power workers responded by voting for overtime and availability bans at a mass meeting in June.

When the SEC stood down two workers for imposing the bans, 200 workers at their Morwell depot walked off the job. A mass meeting of maintenance workers from across the Valley’s power stations then voted for a week-long strike. They agreed to put this on hold if the Arbitration Commission would hear their case promptly. By the end of August, after continual stalling, they had had enough.

They had four big strengths on their side. The Valley produced the vast bulk of Victoria’s electricity. By turning off the power they could shut down one-third of Australian manufacturing.

They had strong workplace delegate organisation and were capable of running the dispute themselves.

Their distance 160 kilometres from Melbourne meant they had been forced to develop a certain self-reliance, and even suspicion of union officials from Melbourne as “outsiders”.

The Valley, been built around the power industry and its coal mines, was intensely class conscious. Yallourn North, for example, was Australia’s strongest Labor town—with around 85 per cent Labor voters.

One weakness was that the SEC had previously split off the key dredge operators from the rest of the workforce, by handing them improved pay and conditions.

Dredge operators could stop the power supply immediately by refusing to load coal to the power stations. Without them, the maintenance workers had to strike for about six weeks before machinery broke down and power supplies were disrupted.

The SEC sat out the first six weeks hoping to starve the maintenance workers into giving up. Then it tried to use scab coal, and the Valley erupted into picketing outside power station entrances.

By week seven severe power restrictions hit Melbourne and employers had to stand down half a million workers.

Liberal Premier Dick Hamer threatened to declare a state of emergency and send strikers to jail.

But it was largely a bluff. The government was too scared that this would risk an even larger strike demanding their release, like that only eight years previously when union leader Clarrie O’Shea had gone to jail.

The key problem was the power workers’ union officials.

Even the most left-wing union officials retain a loyalty to Australian capitalism. They were nervous about a total shut down of one third of Australia’s manufacturing, no matter how just the Valley workers’ pay claim was.

And they were committed to electing a Labor government as the key to delivering change. The disruption of a major industrial confrontation, the workers were told, would damage Labor’s chances in a snap election, tipped for November or December.

The Communist Party would write in their paper Tribune that power workers were, “playing right into Fraser’s election plans.”

The full-time trade union officials are professional negotiators between workers and employers.

Removed from the pressures of work under the bosses’ control, they become conservatised by their role turning off industrial action in order to strike deals.

Just as the strike was beginning to bite, John Halfpenny, the leader of their union the AMSWU, proposed a return to work at a shop stewards meeting. Not one of the 40-odd stewards present agreed.

In order to demobilise the strikers, Halfpenny set about doing two things.

He encouraged them to drive to Melbourne, not to build support in Australia’s second biggest city, but to attend hearings at the Arbitration Commission.

The hours of tedious legal argument and stonewalling from the SEC would exhaust and begin to demoralise the stewards.

He also tried to create the feeling that there was no outside support and that public opinion was against them. The union officials claimed that stand downs caused by power outages would turn other workers against them, leaving them isolated and liable to defeat.

The geographical isolation of the Valley meant many of the workers and stewards did not know the depth of support they had around Australia until it was too late.

In fact the strike enjoyed widespread support. Many Victorian and interstate workplaces collected for the power workers’ strike fund, raising $200,000, an Australian record at the time.

Halfpenny, as well as Armstrong and a number of other stewards, were all members of the Communist Party of Australia (CPA). But Halfpenny’s real loyalties were to the rest of the trade union officials, and through them to the Labor Party.

The union officials’ main concern was not to win the dispute but to divert it into Arbitration. After nine weeks Bob Hawke, then head of the union movement as ACTU President, came up with a plan to run an “anomalies” case in the Arbitration Court.

Sammy Armstrong convinced first a stormy shop stewards meeting, then the rank and file, to return to work while it was heard.

The strikers went back to work for three days while three judges, on 15 times their pay, contemplated whether there were “anomalies” that justified a pay rise.

Both Hawke and Halfpenny would have settled for a token $5-10 rise. The judges, thinking the strike was finished, gave them nothing. Furious, the power workers walked out on strike again.

A major crisis was now brewing, with talk of the police occupying the Valley. Fraser offered the army to run the power stations.

He told them bluntly other unionists would desert them if they kept causing stand-downs and demanded they go back to work in exchange for a new Arbitration “work value” case. According to Max Odgen, Education Officer of the AMSWU, Hawke told them, “We might have to withdraw our official ACTU support if you don’t accept”.

Hemmed in both by their own officials and the ACTU, the Valley shop stewards recommended a return to work.

Four months later the Arbitration Court awarded them pitiful pay rises of $2 to $5 a week, with 30 per cent of the workforce getting nothing at all. The strike had cost them $2000 in lost wages.

The dispute was a turning point. The level of strikes in Victoria in particular plunged, as workers drew the conclusion that winning pay rises was impossible.

It helped usher in a major downturn in industrial struggle from which workers in Australia are yet to recover.

The tragedy is that the strike could have been won. The industrial muscle, the shop-floor organisation and wider working class support was there. It was never fully mobilised. The trade union officials made no effort whatsoever to build outside solidarity or support.

This would have required a kind of organisation among the rank-and-file that was missing. A rank-and-file network, prepared to act independently of the union officials, could have sent strikers to tour workplaces across the country seeking solidarity and donations to reinforce strikers’ morale.

The few stewards who did speak at meetings outside the Valley came back heartened.

When two stewards were finally sent to Newcastle and Wollongong to raise funds after 11 weeks on strike, they were so impressed by the support that they rushed a telegram to the final mass meeting, urging workers to stay out on strike.

The tiny handful of socialists and shop stewards who attempted to organise this were unable to carry it out alone. By its end, most of the Valley workers couldn’t see any hope for winning the strike.

The union officials are willing to sacrifice working class interests to Labor’s electoral needs, mixing in circles where they feel the influence of capitalist ideas and power more keenly than the workers they represent.

The Latrobe valley strike shows the need for rank-and-file organisation within the unions, backed by socialist organisation.