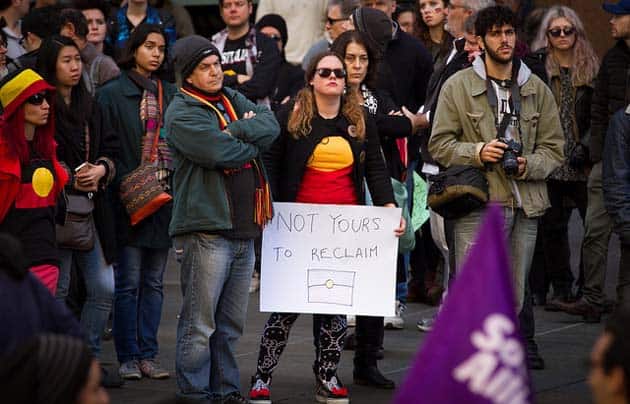 Reclaim Australia has been humiliated, with its second round of racist anti-Muslim protests on 18 and 19 July a flop. Practically everywhere they were outnumbered by anti-racist counter-rallies, and could only draw one or two hundred people.

But their Islamophobia continues to be fuelled by the political mainstream, with one of Tony Abbott’s MPs, George Christensen, even agreeing to speak at the Reclaim rally in Mackay.

It is right to rally against Reclaim Australia. Allowing organised racists to gain confidence leads directly to a rise in violent racist attacks on Muslims and immigrants.

The counter-demonstrations have helped isolate Reclaim Australia, meaning anyone who attends their events cannot escape being branded a racist. In Melbourne, organiser Mike Holt from Restore Australia told Fairfax media, “I can’t believe how small the crowd is. It’s terrible.”

The police have made it clear that they will protect the racists and help them hold rallies. In Sydney anti-racist protesters were pushed right to the other end of Martin Place, out of earshot of the racist rally.

In Melbourne, a group of racists from the United Patriots Front were given a police escort to allow them to join the event. Police used a new kind of pepper spray indiscriminately on the anti-racist crowd. They even pepper sprayed a “Street Medics” area, set aside to treat anyone injured at the protest, where an injured man who was already struggling to breathe was waiting for an ambulance.

In Sydney, the anti-racist rally was too small to stand its ground anywhere near Reclaim Australia. This shows the importance of drawing larger numbers of people to the counter-rallies.

Setting out to shut down Reclaim Australia, or take over the space where they plan to have their rally, was not a success. This approach only served to narrow the anti-racist rallies so that they involved fewer people beyond the far left.

It meant many of the rallies did not even try to have organised speakers from groups like The Greens, unions or the Muslim community.

Reclaim Australia has been attempting to mobilise racist crowds, not on the basis of neo-Nazi street fighting, but by appealing to racism against Muslims. Once again they attempted to insist that they “weren’t racist” and to cover up their neo-Nazi links by saying they simply wanted to hold peaceful protests.

The rise in racism against Muslims needs to be challenged. Reclaim Australia is a product of the mainstream Islamophobia coming from the Abbott government. Abbott has seized on every opportunity to whip up fear about terrorism, concocting successive rounds of new anti-terror legislation and laws to strip people’s citizenship.

The paranoid Islamophobe Liberal National MP George Christensen, who backed a parliamentary inquiry into halal food, joined the Mackay Reclaim rally to rant about a supposed “culture of appeasement to radical Islam”.

Neo-Nazi groups were also clearly present at the Reclaim rallies. But there are tensions between the neo-Nazis within Reclaim and those who simply see themselves as anti-Islam. Reclaim Australia has already split, with the formation of the ridiculously named “United Patriots Front”, a more hardline fascist outfit. Former Hobart Reclaim Australia organiser James Gilhome said this group had talked of trying to smuggle weapons into the Melbourne protest, and ranted online about the need to take on the left. Police found a gun on their bus travelling from Sydney to Melbourne to join the protest, but released its owner without charge.

If it is allowed to grow, Reclaim Australia can provide a larger breeding ground for violent neo-Nazis. Continuing to expose the neo-Nazi presence at Reclaim’s rallies will deepen the fractures, and help cripple Reclaim from organising future protests.

But with Abbott continuing to beat up fear about Muslims and terrorism, the ideas that fuel Reclaim Australia are not going away.

To combat Abbott’s racism and stop the growth of groups like Reclaim we also need a broader campaign against Islamophobia. This should include demonstrations uniting a broad cross-section of groups including the Muslim community as well as unions, The Greens and other ethnic community groups. Together we can help forge the unity among working class people needed to turn back Abbott’s racism.