The turn to America in 1941: Using US power to push Australian imperialism 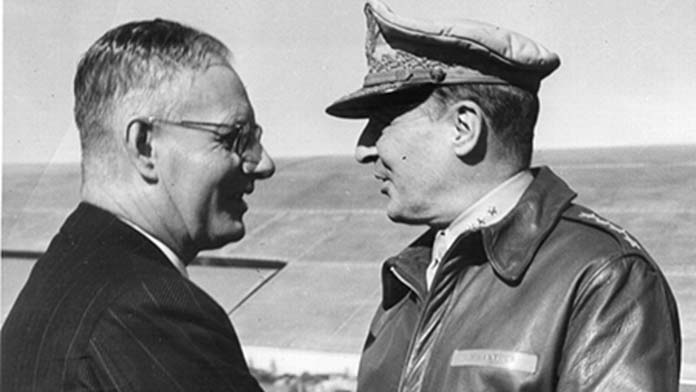 Just over 80 years ago Prime Minister John Curtin made a dramatic declaration shifting Australia’s allegiance from Britain to the US. Miro Sandev examines the motives

As the imperialist rivalry between the US and China continues to escalate, Defence Minister Peter Dutton has been whipping up a frenzy of anti-China warmongering.

He nonchalantly committed Australia to war against China over Taiwan, saying: “It would be inconceivable that we wouldn’t support the US in action if the US chose to take that action.”

While criticising the most inflammatory of Dutton’s comments, Labor agrees with the Liberals on the primacy of the US alliance to Australia’s “security”—by which they mean securing Australian corporate profits and Australia’s ability to dominate its weaker neighbours economically and militarily.

For decades Australian governments saw their military and strategic interests as tied to British power. However, in late December 1941 during the Second World War, Prime Minister John Curtin famously declared that Australia would instead look to America “free of any pangs as to our traditional links or kinship with the United Kingdom”.

This shift has been interpreted by some as turning Australia into a US satellite.

Don Watson, former speechwriter to Prime Minister Paul Keating, argued that Australia became so subservient to the US that it might as well become the 51st US state.

But Australia’s actions show it has never simply gone along with the wishes of its great power patrons and has always pursued its own distinct sub-imperialist interests, with a focus on its own ability to dominate and shape the South Pacific region.

The states that make up federated Australia began as British colonies. From the beginning the colonies were tied to Britain through bank loans for economic development, immigrants to develop the stolen land and markets for the sale of their commodities. The British Navy provided the ultimate security guarantee.

But from the 1850s onwards, a local capitalist class began to emerge, pursuing its own distinct interests as it sought to dominate the South Pacific. They tried to take any opportunity for controlling resources and profits around nearby islands including Vanuatu, Fiji and New Guinea. In addition they wanted to exclude rivals such as France, Germany and Russia in order to secure trade routes and military advantage.

These Australian capitalists were often more aggressive about spreading the British empire than the British ruling class themselves. But they relied on British ships, troops and guns in the final instance.

Their goal was to pull British forces ever deeper into the region so as to secure their own domination and influence.

The troops sent to fight for Britain in the First World War were a down payment for Australian ambitions over Papua New Guinea, the Solomons and other islands south of the equator.

Australia entered the Second World War as a British Dominion. But Britain lost its status as the dominant imperialist power during the war, supplanted by the US. By 1945 the US was producing 50 per cent of the world’s manufactured goods; it was the world’s leading foreign investor; and the dollar had replaced sterling as the world’s main trading currency.

But far from simply deferring to the plans of either of their more powerful allies, Australia’s rulers prioritised their own interests.

They were all too aware that Britain and the US had global interests and would often prioritise other regions over the Pacific, leaving Australian interests exposed. These fears grew out of their experience of the war.

War in the Pacific

The Japanese attack on Pearl Harbour in 1941 and their subsequent advance into South-East Asia were met with horror by Australia’s rulers.

But in the UK, Prime Minister Winston Churchill was initially ecstatic because Pearl Harbour meant the US, which had until then remained absent from direct combat, would be forced into the Allied war effort against Germany. He was focused on making sure the US concentrated the bulk of its forces on fighting Hitler’s armies in Europe.

Churchill and US President Franklin Roosevelt had already agreed that in the event of a war on multiple fronts, the Allies would seek to defeat Germany first. Curtin opposed this focus and wanted more Allied troops stationed in the Pacific. He insisted on Australian participation in Allied war planning for the Pacific. Churchill bitterly resisted this.

The collapse of the British defences in the face of Japanese advances created another flashpoint.

After Japan sunk two British warships, Britain suffered the catastrophic loss of its naval base in Singapore. This had been crucial in the Empire Defence strategy for Asia that was at the centre of Australian military planning. Given that Churchill had made strong commitments to Australian officials that Singapore would be held, this caused a rift and forced Australian officials to re-evaluate British security guarantees in the Pacific.

It was under this cloud of suspicion that Curtin rejected Churchill’s request for Australian troops to be sent to fortify British positions in Burma. Following the fall of Singapore, Churchill decided to recall two Australian divisions from the Middle East. But Curtin insisted that they return to Australia to meet the perceived threat of Japanese invasion.

Curtin had been fearmongering about Japanese invasion to bolster the war effort and public support for the war. In reality, Japan’s military chiefs had no plan to invade Australia.

From 1942 onwards the US led Allied military operations in the Pacific. But the US did not accept that Australia was ditching its alliance with Britain and Curtin’s famous statement was poorly received in America. US General Macarthur told Curtin that the US had no interest in the military defence of Australia and wanted it simply as a base of operations in the Pacific.

Australia did not fight in the Pacific war because it was interested in liberating the peoples being conquered by Japan or spreading democracy. While Japan attempted to occupy large parts of South-East Asia, Australia had its own imperialist ambitions.

Among Australia’s rulers the war effort was seen as an admission ticket to the peace conference, where territories would be carved up by the victors. This was why Australia champed at the bit to be included in the forces occupying Japan at the end of the war.

Labor Foreign Minister Doc Evatt, lauded as a progressive internationalist, was in lockstep with conservatives on this.

Under his leadership, Australia offered to “police” East Timor, New Guinea and the Solomons, and “share in policing” large sections of Indonesia as well as the New Hebrides. In fact, at the end of the war Australia and Britain collaborated with Japanese forces to help quell anti-colonial liberation struggles in formerly Dutch-controlled Indonesia.

Evatt demanded that in any post-war settlement it was crucial that “American power be made to serve Australian purposes”. He wanted the US to retain control of the Japanese Ryukyu islands and Iwo Jima as well as the Mariana islands.

According to Evatt this would provide the best bulwark for Australia against a resurgence of Japanese aggression and against the possibility of Russian advance in the Pacific.

Evatt called for permanent American bases on these island groups, as well as a “Pacific pact” between the US and Australia against any possible attack.

A pact along these lines was signed in 1952 by the Liberal Menzies government in the form of the ANZUS treaty.

Every Labor government since has supported ANZUS and the reliance on US power to bolster Australian domination in the region.

Australia enthusiastically joined the US war in Korea in 1950 to deepen the alliance and encourage more US intervention in the Pacific.

By the end of the 1950s the US alliance had become the primary aspect of Australia’s military planning.

Between 1957 and 1963 Australia standardised its military equipment with the US and adopted American military organisational practices. It also started cooperating closely with the US on exchange of information and greenlighted the building of the North West Cape naval communications station, which was mostly operated by the US.

However, Australia did not immediately sideline Britain, as seen in its strong support for the aborted British-French invasion of Egypt in 1956, opposed by the US.

It also collaborated closely with Britain on the development of atomic bombs, supplying Australian uranium and allowing tests to be conducted in the outback.

Australia committed troops between 1950 and 1963 to help the British put down the national liberation struggle in Malaya, led by communists. Australia sent an infantry battalion, as well as ships and RAAF bombers and fighters. Australia continued to lobby Britain to maintain a military presence in the region as late as 1966.

There is no doubt that since the Second World War the Australian ruling class has come to primarily rely on the US instead of Britain. But it also continued to work with Britain for several decades after 1941, pursuing its own interests by trying to keep British military forces engaged in the region.

It did not simply follow US wishes after switching allegiance.

Morrison and Labor’s Penny Wong both claim that the US alliance, like the British alliance before it, is based on some sacred “shared values” between the two nations.

This is nonsense. Australia’s shift from relying on Britain to relying on the US is based purely on furthering the interests of Australian business and its political allies.

This is why it now champions the US-led “rules-based order”—because it provides the framework within which it can throw its own weight around. We need to oppose the militarism of Australia’s rulers and work to unite working class people across our region in solidarity against the drive to war.

Labor’s Pacific charm offensive aims to shore up Australian and US...

Labor’s Foreign Minister, Penny Wong, has spent her first weeks in government shoring up Australia’s sub-imperialism in the southwest Pacific across the arc of Australian strategic interests.

Billions wasted on weapons—stop the march to war on China

The Morrison government remains stuck behind in the polls and is relentlessly trying to take us into a khaki election.