Capitalism and the climate crisis—Why it’s socialism or extinction 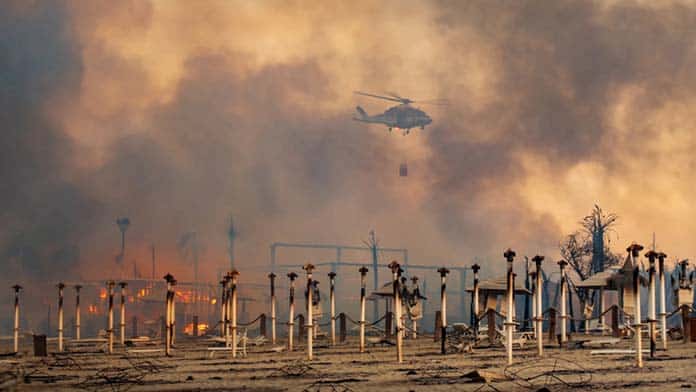 A new book explains why it will take a revolution to force the action needed to halt the climate crisis—and how we can win one, explains Rory Larkins

The last few years have seen a growing climate movement worldwide in the face of world leaders’ refusal to take the action needed to avert catastrophe.

From the school student Climate Strikes to Extinction Rebellion and Blockade Australia as well as the demonstrations around last year’s COP26 summit, new groups have sprung up to demand climate action.

Many have raised the slogan “system change, not climate change”. This acknowledges how massive fossil fuel corporations have forced governments to protect their interests. But what kind of system change do we need, and how do we get it?

Some, including prominent writers like Naomi Klein, see the problem as neoliberal policies which rely on the free market to fix the problem, rather than capitalism itself.

Their solution is often to support left-wing leaders like Bernie Sanders in the US to implement some sort of Green New Deal.

But efforts in parliament always end in disappointment.

The Greens here claimed their ability to block legislation in parliament would force Labor to the left. But The Greens were unable to push Labor to make any significant improvements to their pitiful 43 per cent emissions reduction target. The focus on parliament also carries the danger of demobilising the climate movement to focus on elections, instead of looking to movements from below to deliver change.

Martin Empson’s new book Socialism or Extinction: Revolution in a Time of Ecological Crisis is an accessible explanation of why only a socialist revolution—where workers seize control of their workplaces and run the economy democratically—can stop capitalism from destroying the world in its endless drive for profits.

It guides readers through many of the common debates in the climate movement.

Empson takes care to build his argument from the ground up. For this reason, it is a worthwhile read for anyone involved in climate activism.

He argues that disastrous climate change is an inevitable product of the inner working of capitalism as an economic system. He writes, “All capitalist production requires the use of natural resources through the exploitation of human labour. Because competitive accumulation is central to capitalist production, there is no limit on the system’s degradation of nature.”

Fossil fuels are central to capitalism, he argues, with fossil fuel corporations including energy companies and car manufacturers making up the bulk of the world’s largest companies.

The book also traces why fossil fuels became so embedded in the system, looking at the way the steam engine powered by coal helped drive forward the industrial revolution, and how the use of coal and oil by European colonial powers allowed them to control the world through steamships and later more advanced battleships and aircraft.

He dismisses any hopes of a green capitalism, looking at how market-based solutions such as carbon credits or offset schemes, which have made no dent in reducing emissions, can potentially encourage more fossil fuel investments.

These scams have been at the heart of all the carbon markets and emissions trading schemes that were supposedly designed to reduce emissions.

As Empson writes, “These schemes are attractive to the capitalists because they appear to offer a way of dealing with climate change while allowing capitalist production to continue as normal.”

What kind of movement?

In the face of the lack of real action, a number of more radical groups in the climate movement have concluded that conventional campaign tactics have failed.

Roger Hallam, one of the founders of Extinction Rebellion, argues that non-violent direct action is the only way to win change, while author Andreas Malm advocates violent tactics such as blowing up oil pipelines.

Empson contrasts these approaches with the success of mass mobilisations which combine large-scale street marches with disruptive mass direct action.

For instance, the Standing Rock campaign which stopped the construction of the Dakota Access Pipeline was, “led by Indigenous people and supported by environmental activists, workers and even military veteran groups.” There were 15,000 people involved in the protest camp at its height.

But to win permanent change, we will need mass movements on an even larger scale.

Empson discusses the various proposals for a Green New Deal and massive state intervention to build a sustainable society.

If all the world’s resources were put to use to immediately transition to renewable energy, we could cut pollution extremely quickly. We could ensure sustainable practices in all of our industries, we could make energy free and available to everyone. We could set to work on repairing the damage already done, and ensure no one is left behind.

But the challenge of such proposals to reform capitalism “is getting them implemented”, he writes.

Activists who advocate getting more progressive politicians into power or change within the existing system under-estimate the forces we are up against.

As Empson explains, the power of the state alongside the interests of the rich means that, even when left-wing parties get a foothold in parliament, they are unable to implement the wide-reaching reforms that tackling climate change requires.

Capitalists, unable to escape the system’s logic of competition and profits, will not allow this to occur due to its threat to the profits of the massive fossil fuel companies.

The ultra-rich own the bulk of the mainstream media and use this to promote their agenda. But they also have enormous power thanks to their control over the major corporations and society’s basic economic decisions.

In the past they have used this to force elected governments to do their bidding through threatening to sack thousands of workers and crash whole national economies.

In a worst-case scenario, the ruling class can use the state not just to use violence against protests and social movements but to resort to the military to overthrow governments and parliamentary democracy itself.

Empson therefore argues that in order to stop climate change, it is not enough to get progressive politicians into power but that the capitalist system as a whole has to be overthrown.

Empson draws on the history of past revolutions, such as the Paris Commune of 1871, the Russian Revolution of 1917 and more recent events like the Egyptian revolution in 2011 and the revolution in Sudan still ongoing from 2019 to explain how this has occurred.

He explains why the working class is central to any hope of revolutionary social change.

Capitalism is a system which protects the property rights of the bosses. The vast majority of people, who own nothing, must work for these bosses in order to live.

This unequal situation means that bosses can exploit workers by only paying them a fraction of what they earn for the bosses through their work.

While this means that the world is run in the interests of a tiny minority of ultra-rich bosses at the expense of the vast majority, it also reveals capitalism’s Achilles’ heel.

Through taking strike action and collectively refusing to work, workers have the power to bring capitalism grinding to halt. Strike action on a large enough scale shows ordinary working class people their own capacity to control society and run it for themselves.

Workers’ control of individual workplaces would be the basis for democratic control over the whole economy. This means that instead of a capitalist economy characterised by competition, exploitation, and the endless accumulation of profits, workers could run the economy along socialist lines.

There would mass democratic control of every aspect of society to ensure that everyone’s basic needs are met, and production run on the basis of planning, active participation, and debate.

This sort of socialist economy would be run by the vast majority in their own interests, and allow decisions about social and economic priorities to take full account of environmental sustainability.

It would allow a rapid and planned phase out of fossil fuels in favour of renewable energy and a zero carbon economy. Only then will climate change be addressed adequately and efficiently.

What we need is a socialist revolution. The question becomes: how do we get it?

“But none of these steps are inevitable… Whether they do or not depends on the specific situation and the conscious intervention of women and men arguing for the movements to take those steps.”

This shows the need for a revolutionary socialist organisation which is capable of leading the movement to victory.

As he writes, “Revolutionaries cannot conjure revolution from thin air, but they can act to develop the combativity and organization of workers.”

In the here and now, socialists must aim to the broaden the climate movement, to develop the struggle, and to provide concrete answers to the challenges of the day. Martin Empson’s book is a thorough guide to equipping ourselves with these answers.

Socialism or Extinction: Revolution in a Time of Ecological Crisis, by Martin Empson, Bookmarks $25.