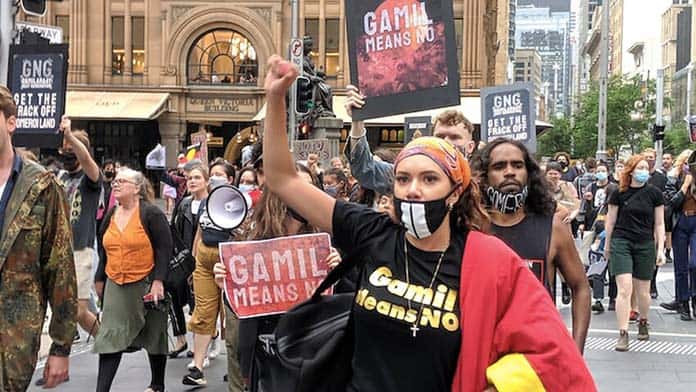 The Narrabri project would see 850 coal-seam gas wells established across a 95,000 hectare site in the Pilliga forest and surrounds, the largest temperate woodland in eastern Australia and some of the last remaining forest on Gomeroi Country in northwest NSW.

Santos wants to extract the equivalent of half of NSW’s current gas consumption every year, releasing 127 million tonnes of greenhouse gas emissions (CO2 equivalent) over the life of the project.

This would see the destruction of precious eco-systems relied on by many endangered species and threatens to pollute the Great Artesian Basin.

In 2020, the Independent Planning Commission gave Santos the green light, despite 98 per cent of the 23,000 submissions made opposing the project.

Now the only legal barrier in the path of Santos is the Native Title rights of Gomeroi people, who have refused to give consent.

“We call this area the Billaga. It was a meeting place of different tribes for ceremony and our law. Every tree, every bird, every animal that is part of that beautiful ecosystem is so special to us. We will never stop fighting.”

Gomeroi people successfully registered a Native Title claim in 2012. While this claim has not yet been determined, any company wanting to operate within the claim area have an obligation to negotiate with Gomeroi.

Despite offering this “right to negotiate”, however, the Native Title system prioritises the rights of resource companies over traditional owners. Aboriginal people have no power to veto projects. If claimants refuse to enter into an agreement, companies can apply to the NTT to impose the project anyway, destroying the lands and potentially extinguishing Native Title.

In May 2021, Santos lodged four “Future Acts Determination Applications” with the Tribunal, asking it to exercise its powers to impose the project by dispossessing Gomeroi.

Before they wipe out Gomeroi rights, the Tribunal must consider whether the proposed project is in the “public interest”. Consistently, similar rulings are made in favour of resource companies, on the grounds that mining is crucial to the Australian economy.

Both the Morrison and Perrottet governments are disgracefully supporting Santos. Morrison has campaigned hard for the Narrabri project, expediting the approval process and committing subsidies for pipeline infrastructure as part of his government’s “gas-fired recovery” policy.

Morrison’s $600 million investment in a new gas-fired power station at Kurri Kurri is also a gift to Santos, guaranteeing a major domestic customer for gas fields in the Pilliga.

On 7 February, while the NTT sat to progress Santos’ application, Workers for Climate Action (W4CA), a group of trade unionists, worked with Gomeroi people to stage a protest outside the Federal Court building in Sydney. Gomeroi youth also led a protest in Brisbane.

Gomeroi woman Suellyn Tighe and Kim Ellis from Coonabarabran said in a statement:

“The Gomilaroi Nation is being sacrificed for the Morrison government’s gas fired recovery. We should transition to green jobs … but governments need to ensure that infrastructure and good jobs are in public hands. First Nations throughout Australia must be front and centre with the power to determine what happens on their own country.”

This call for mass public investment in a just transition away from fossil fuels has won support across the union movement. In 2021, W4CA co-ordinated a statement opposing the Narrabri project and demanding alternative public investment in “climate jobs” that was signed by union leaders from the MUA, IEU, PSA, nurses union, Teachers Federation, NTEU and more.

In May 2021, the ETU was refusing work on the Santos project due to broad Gomeroi and community opposition. This opens the door for a campaign for a serious union ban.

Opposition to Santos is strong across affected local communities and among farmers. But Santos uses promises of jobs and their sponsorship of many essential services as a weapon to blunt opposition in this economically disadvantaged region.

The NTT will hold a hearing to make their decision in April. It is vital that the climate movement and all supporters of Aboriginal rights ramp up campaigning against this catastrophic project and the shameful way that Native Title works for resource companies instead of First Nations.

Speaking from the Brisbane rally, Gomeroi and Kooma woman Ruby Wharton told Brisbane Indigenous media that the fight will intensify through the Tribunal process:

“Even if you’re not Gomeroi, this is your fight too. This will drive climate change and harm the Great Artesian Basin, you are fighting for your own children’s future.”