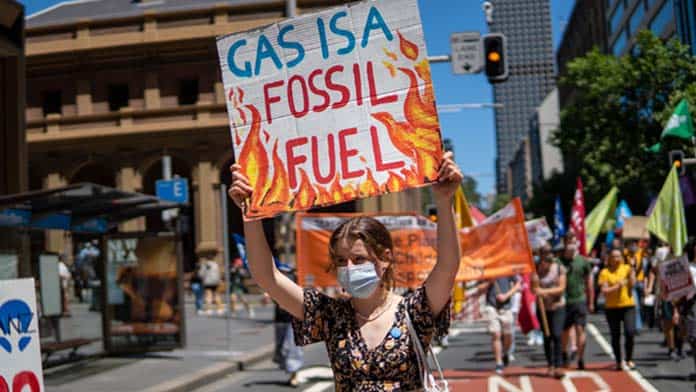 The federal election result was a cry for climate action. The coal-carrying Morrison government was wiped out, losing 17 seats—six to teal independents, one to The Greens, and the rest to Labor. The Greens picked up three extra seats, and also now hold the balance of power in the Senate.

Climate change was rated the top issue by one in five voters—more than any other issue. This was true in city centres, suburbs and the regions. Polling showed that in every electorate the majority wanted to see strong climate action, even traditional “coal seats” such as Newcastle and the Hunter. Climate votes were especially high in seats hit by recent extreme weather events.

The climate strike movement by School Strike for Climate (SS4C) decisively shifted the debate on climate action over the last three years. After the shock re-election of the Coalition under Scott Morrison in 2019, the mass, militant action of stopping school and students walking out in their thousands gave people renewed hope and a focus.

Unions backed the strikes, including the ETU and MUA which represent workers in fossil fuel industries. In the coal-dependent Hunter, unions joined forces with environmentalists to set up the group Hunter Jobs Alliance. There is a growing sense in coal communities that “the writing is on the wall”, with coal power stations and mines moving their closure dates forward. Workers want a plan for their future.

But there is a gap between this desire for change and what the Albanese government is willing to deliver. Labor says they believe in the science, but their emissions reduction target of 43 per cent by 2030 is lower than what they took to the last election and lower even than the Business Council of Australia’s.

Labor have also talked of making Australia a “renewable energy superpower” and acknowledged climate change as an existential threat to Pacific nations. But they will oversee an enormous expansion of fossil fuels. The new Resources Minister Madeleine King told a gathering of the Australian Pipeline and Petroleum Association (APPEA) that, “we support opening up new gas reserves… For example, last month Labor agreed to support the Beetaloo cooperative Drilling Program Instrument in the Northern Territory.”

Labor is also backing the Woodside Scarborough gas project off the coast of WA, a carbon bomb estimated to release 1.37 billion more tonnes of carbon dioxide in the next 25 years. By 2030 it will add 7 per cent to Australia’s emissions. It is equivalent to opening up five new coal-fired power stations. Madeleine King has declared Labor’s “absolute” support for the project.

In NSW the Gomeroi people have led a staunch campaign to stop Santos drilling for gas on their land in the Pilliga. Santos is now attempting to extinguish their native title rights in court. Labor has backed that project too.

The centrepiece of Labor’s climate policy is a $20 billion upgrade the transmission grid to “rebuild and modernise the grid”. This is necessary—the existing grid is crumbling, and was designed for large fossil fuel projects, not the flexibility needed ensure base-load renewable power.

But Labor has no serious plan for a transition to 100 per cent renewables or ensuring a just transition for workers, leaving everything to private energy companies driven by profit. Yet construction continues on the taxpayer-funded Kurri Kurri gas plant, costing $1.2 billion.

All eyes are on the federal government’s climate policy right now, and there will be pressure on them from inside the Parliament to deliver more serious climate action. But Labor is haunted by the climate wars of the past, and the media and fossil fuel lobby will work overtime to keep them within the bounds their limited promises. We are still headed towards climate disaster.

There are currently debates in SS4C about moving away from its strategy of targeting government towards targeting banks. But there is every reason for SS4C to put a call-out for a big strike during COP27 in November, and declare their intention to continue striking for their demands of no new fossil fuels; a just transition centring fossil fuel workers and First Nations; and public investment to drive 100 per cent renewables by 2030.

Now is the time to put the Albanese government on notice that the movement is not going anywhere.