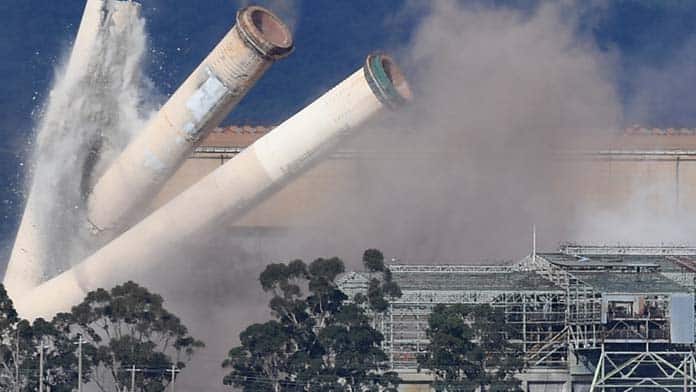 The announcement that the closure of the Yallourn power station has been brought forward by four years to 2028 is another nail in the coffin for coal-fired energy.

Yallourn is one of three generators in the Latrobe Valley east of Melbourne that burns brown coal, the dirtiest form of coal. It produces 13 per cent of Victoria’s emissions, 3 per cent nationally.

The closure will lead to 500 workers losing their jobs in a region that has been struggling since the Kennett Liberal state government privatised the power plants in 1994. The sudden closure of the nearby Hazelwood plant in 2017 destroyed many hundreds more.

Over the past year, baseload electricity prices in Victoria have crashed 70 per cent from about $80 a megawatt-hour to $24, putting most coal-fired plants into the red.

The energy generation system is in chaos, with Friends of the Earth finding that if power prices continue to decline, Yallourn, along with the Eraring, Mt Piper, Vales Point B and Gladstone black coal plants would be making a loss by 2025.

At the heart of the problem is the refusal of the federal government to plan a transition to 100 per cent renewable energy, relying instead on a defence of coal and a “gas-fuelled” recovery and relegating change to market forces. Sadly, Labor is offering little different.

Even where the Liberals have cut against the market it has been to prop up coal and gas profits. They gave $4 million for a feasibility study by Shine Energy into a coal-fired power station at Collinsville in north Queensland even though the funding broke their own rules.

Energy Minister Angus Taylor has threatened private operators that the government would build a gas-fired replacement for the Liddell coal-fired power station the NSW Hunter Valley if they failed to do so.

Yet a report by the Institute for Energy Economics and Financial Analysis says renewables are forecast to provide 40-50 per cent of national energy market demand by 2025.

“The additional renewable energy generation coming online from 2018 to 2025 will be enough to supply 99.9 per cent of the Australian Energy Market Operator’s (AEMO) expected demand growth and 98 per cent of the gap expected to be left from the Liddell power station retirement,” the report states.

Moving to 100 per cent renewables is essential if there is to be any hope of slowing, let alone stopping, global heating. But there are two major problems that market forces can’t solve.

The first is the construction of enough solar power and wind plants, accompanied by large-scale batteries and, just as importantly, a transmission grid that can distribute power generated in new regions.

The second is ensuring that fossil fuel workers can move to secure, well-paid union jobs.

A senate committee found in 2017 that, “companies, on average, have given less than four months’ notice to affected workers and communities of upcoming plant closures”.

Yallourn workers have seven years’ notice but many commentators expect the plant to shut earlier than announced.

The Victorian government did nothing in the run-up to the Hazelwood closure. In its wake it announced a Worker Transition Service for power workers that was later expanded to include workers from a nearby timber mill.

Of the more than 850 workers to take part in the scheme, only 306 were in full-time work two years later, with 307 finding casual work and 35 working part-time. Some 219 were unemployed.

In 2018, the state government announced it would subsidise the establishment of an electric vehicle factory in the Latrobe Valley, to open in 2022. But in March this year the deal was declared close to collapse, with not one job created.

Change is needed on a much bigger scale. Beyond Zero Emissions argues that we should build 90GW of renewable energy supported by 20GW of batteries over five years and estimates this could provide up to 50,000 jobs per year (including in construction, manufacturing, transmission and batteries).

An effective transition will need to be led by the workers, unions and communities affected and must involve direct government spending to create jobs, whether through new renewable power plants, rehabilitation of former mines or power plants, free training courses for new skills or expanded public services.