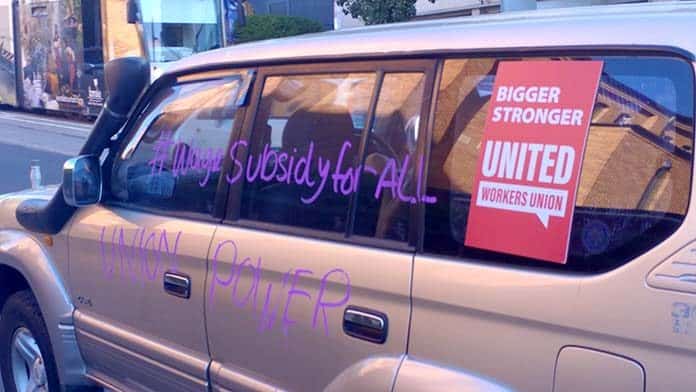 Unions have pledged to keep fighting for income support for all, holding car convoy protests yesterday in Sydney and Melbourne demanding #NoWorkerLeftBehind.

In Sydney over 50 cars crossed the Harbour Bridge to circle NSW parliament, with union flags flying out of their windows from the Maritime Union of Australia (MUA), CFMEU construction division, United Workers Union (UWU) and the National Tertiary Education Union (NTEU).

Outside parliament a number of people also joined the convoy on bikes, and a small group on foot held signs to welcome the convoy. The protest was organised through the May 1 movement, which was formed initially to organise a union stopwork rally on May Day.

As NTEU activist Nick Riemer told Solidarity, “It was extremely satisfying to be able to press our demands in public in a situation when gatherings have been banned. It’s really vital that people not be cowed into silence. Protest can’t become another victim of the virus.”

In Melbourne around 30 cars joined a convoy organised by the UWU.

As Matt Toner, the union’s National Director, told radio 2SER, “We met in Kew and went via Josh Frydenberg’s office and then via parliament to the union [offices] to hand in food that’s been donated so that our members are able to feed themselves.”

As Paul McAleer, Secretary of the MUA Sydney branch put it, “This is 16 per cent of the workforce being chucked on the scrap heap. Half of them don’t qualify for any assistance at all, what’s going to happen to them?”

Matt Toner explained, “I was on the phone yesterday to a Maori woman who’s been in Australia for five years who’s had her hours cut to zero, she works for a big labour hire company that doesn’t qualify for Job Keeper, and because she’s a New Zealand citizen and didn’t get here before 2001 she also doesn’t qualify for Jobseeker.

“She will have no money to put a roof over her head, buy food for her family or pay her bills. This is going to cause a social, economic and health disaster by having hundreds of thousands and potentially millions of migrants and casual workers not entitled to basic welfare from the government.”

Organisers ensured it was a safe, social distanced form of protest with no more than one person per car, unless people were from the same household.

Yet police tried to intimidate the protests using new powers introduced as part of responding to the coronavirus.

In Sydney, dozens of police in marked and unmarked cars as well as bikes shadowed the convoy. A convoy planned for Brisbane was postponed, due to concerns that not enough people were willing to take part in the face of opposition from police.

Over the last week police have abused the new powers on numerous occasions to issue large fines for whatever they deem “non-essential travel”. Victorian police even fined a 17-year-old learner driver $1652 for taking a driving lesson with her Mum. This is despite maintaining safe social distancing by being isolated in a car.

“The police and the government have been trying to shut down this protest”, Matt said.

Four people in Melbourne had their details taken by police and were warned they could receive fines.

But the convoys showed that it is possible to continue to organise and protest despite restrictions as part of social distancing. It is right to stand up to the police intimidation and the threat of fines—protest action remains essential for casual and migrant workers facing poverty due to the lack of any government support, as it does for other workers who face the loss of jobs and income.

Refugee activists in Melbourne are holding their own car convoy today demanding the release of refugees from detention at the Mantra Hotel, where they are at threat of infection due to unsafe and overcrowded conditions.

In Sydney, the May 1 movement is planning another car convoy on May Day to continue the fight for casual and migrant workers. The pressure is growing on Morrison, with unions across the movement including the ACTU calling on the government to expand access to the Job Keeper payment and income support.

If we can win more unions and even greater numbers to join in on 1 May, it will further strengthen the fight.