Defiant protests across Russia say no to war 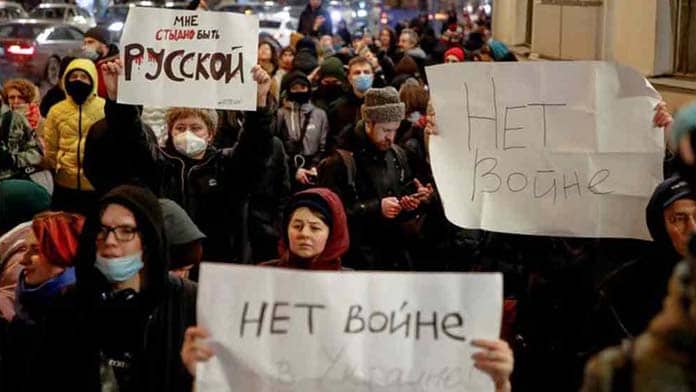 President Vladimir Putin has declared war on Ukraine. But you are not allowed to call it a war if you live in Russia—the government considers it a “special military operation”.

Disagreeing with this term could attract anything from a fine to a lengthy jailtime. Nevertheless, thousands of Russians are defying the state and taking to the streets, as well as employing other forms of resistance.

Since the start of the war, protests have been happening every day, from individual picketing to marches of tens of thousands across hundreds of cities on weekends.

The Russian government has responded with violence. At the time of writing, 14,978 people have been arrested at anti-war protests over three weeks, many violently beaten with batons as gangs of cops singled out attendees.

Plain-clothed men wearing masks were observed beating up protesters and helping the riot squads load people into police trucks. Ironically, some pro-government activists who came to oppose the anti-war movement were also grabbed as the police arrested as many as possible.

There are multiple reports of detained activists being tortured. “Putin is on our side … We’ll beat the shit out of you here and that’s it. We’ll get bonus pay for it too,” a cop is heard screaming as he beats the arrested on a leaked audio recording. Arrested women have been sexually harassed.

Elsewhere, activists have been harassed, their houses searched and trashed, with the letter Z painted on doors and walls—the new symbol of Russian aggression in Ukraine that’s being promoted by the government.

But protests are not the only tactic being employed by Russian anti-war activists. More than 8000 Russian scientists and science journalists signed an open letter demanding the Russian government stop the war. Other professional communities and dozens of student unions have organised similar petitions and open letters.

Celebrities have been also speaking out against war, with 22 banned from performing in Russia and their TV shows and ads taken off air. Many have had to leave Russia in fear of persecution.

Putin’s propaganda machine has also suffered a blow as news show hosts and journalists have resigned from state TV channels. Some had worked there for over a decade and were involved in disseminating propaganda.

Articles have been blocked for using the word “war”. Echo of Moscow, an opposition TV channel, was pulled from broadcasting for criticising the war in Ukraine. Last time this happened was during the attempted coup d’état in 1991.

The editor of Channel One (the key Kremlin propaganda channel in Russia) Marina Ovsyannikova interrupted a live broadcast by walking into shot with an anti-war banner. She also posted a video where she apologised for participating in the propaganda machine and called for protests against the war, saying “they can’t arrest us all”.

She was arrested and fined and potentially faces criminal prosecution. Live programs are now delayed by 30 seconds to 1 minute to prevent similar actions.

The government response has been to increase repression. Some activists were arrested for displaying a sheet of paper with *** ***** written on it, where the number of stars matches the number of letters in the “no to war” slogan.

One person was charged for “silently supporting the illegal aims of a picketing action” because he stood nearby. He was charged with discrediting the Russian army, which is banned under a new law that imposes hefty fines.

Another new act threatens up to 15 years’ jail for “fake news about the Russian army”. The new laws essentially ban anti-war activism, with 164 people charged in just ten days.

Government officials have started talking about bringing back capital punishment, with one of the pseudo-opposition parties planning to propose a referendum.

As foreign companies pull out of the most sanctioned economy in the world, the 200,000 workers they employed in Russia are facing uncertainty. Migrant workers were among the first to feel the blow, fired from delivery services.

While Putin talked about increasing government support for pensioners and other vulnerable groups, no concrete plans have been proposed. Instead, the government talks about the need for “cleaning Russian society of traitors and the fifth column”.

“Now is the time for full economic freedom,” said Putin in a recent speech, proposing decriminalisation of economic offences by bosses. These Pinochet-style reforms will not help the Russian worker. So now is the time for mass strikes.

Only the anti-war movement in Russia can stop the war and improve the living conditions of ordinary Russians. Workers’ solidarity is more critical than ever.