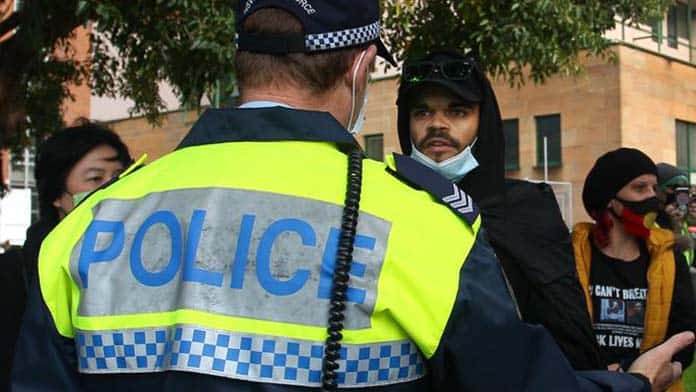 On Saturday 9 January, more than 500 people rallied in Melbourne calling for freedom for refugees confined in the Park Hotel.

This Refugee Action Collective rally was clearly in breach of COVID-19 regulations, which limit protest attendance to 100 people in Victoria. Despite threats by police to arrest organisers, and a huge mobilisation of force, the rally went ahead without incident.

Broad political support for the rally, which was attended by Iranian and Tamil community groups, unionists, churches and others, undoubtedly helped to dampen police confidence to attack the crowd.

Mass protests planned for Invasion Day on 26 January are shaping up to be a more serious confrontation with anti-protest COVID-19 regulations. Thousands of people are expected to attend in Melbourne, Brisbane, and also in Sydney, where protests are currently limited to 500 people.

In 2020, large-scale demonstrations largely disappeared from the political landscape in Australia in the face of lockdowns and continuing restrictions.

One key exception to this was the huge Black Lives Matter rallies in June, which completely overwhelmed police and made regulations unworkable.

Smaller student-led actions against attacks on universities, with some NTEU support, also consistently pushed the boundaries of regulations in Sydney in the second half of 2020, leading to scores of arrests and fines.

The ruling class backlash to the successful BLM rallies was fierce, with overwhelming numbers of police and pre-emptive arrests used to stop further attempts to rally.

Senior Coalition government figures blamed the “second wave” of COVID-19 in Melbourne on the protest, despite no evidence whatsoever that the virus had been transmitted there.

This was a deliberate attempt to generate hostility against Aboriginal people and against protest movements generally.

But there is no evidence that COVID-19 has ever been transmitted at a rally in Australia. The nature of protests means that, with vigilance on the part of attendees, there can be very minimal risk of transmission.

Rallies take place outside, far safer than indoor gatherings without ventilation, and participants can spread out to allow plenty of room for social distancing.

Protest restrictions have been hypocritical throughout the entire pandemic. While only 500 are currently allowed at protests in NSW for example, beaches, shopping centres and sporting events still attract thousands of people.

Even at the height of “lockdown”, many large indoor workplaces continued to operate with far higher transmission risk.

Sadly however, much of the left has accepted the argument that mass rallies during a pandemic are dangerous and irresponsible.

The pandemic period has seen sweeping attacks on workers’ rights, with huge lay-offs and cuts to wages and conditions. Despite this, there has not been a single major mobilisation by trade unions challenging these cuts.

The climate movement has also failed to organise a single major protest. This failure dealt a disastrous blow to the momentum built up through mass climate strikes in 2019.

While activists have stayed at home, climate breakdown is accelerating. Indeed, the Morrison government is taking advantage of the pandemic to upscale fossil fuel extraction, promising a farcical “gas-fired recovery” from the COVID recession.

Attempts at “online rallies” throughout the COVID-19 crisis have failed to have any meaningful impact. Mass, in person demonstrations are needed to build real collective power and force issues onto the agenda.

In a press release encouraging supporters to come out for the upcoming Sydney Invasion Day rally, Lizzie Jarrett, a Gumbaynggirr, Bundjalung and Dunghutti woman argued:

“Unlike COVID-19, the virus of colonial racism that came to these lands in 1788 cannot be defeated by self-isolation or quarantine. We need to come together and fight back. Throughout the pandemic our people are still being locked up and killed and our children are being taken at ever increasing rates”.

We need this same militancy and urgency across all struggles for justice.

In Argentina, a long-standing campaign to legalise abortion had a decisive victory in December, with new legislation passed through parliament. This was the result of mass demonstrations and street occupations that continued through the height of one of the worst COVID-19 outbreaks in South America.

In Greece, which also experienced a new COVID-19 surge in December, trade unionists defied a ban on protests to hold major strike rallies in city squares in opposition the conservative government’s austerity budget.

Health unions were at the forefront of the Greek protests, which observed strict COVID-19 safety measures. Health workers pointed to the hypocrisy of the government trying to ban protests on grounds of COVID-19 safety, while they cut hospital budgets.

There will almost certainly be continuing outbreaks in Australian cities all year and continuing attempts to ban large protests.

But we cannot afford for 2021 to be another year where we allow COVID-19 regulations to keep us off the streets.