Melbourne needs more support for workers and the health system, not authoritarian controls 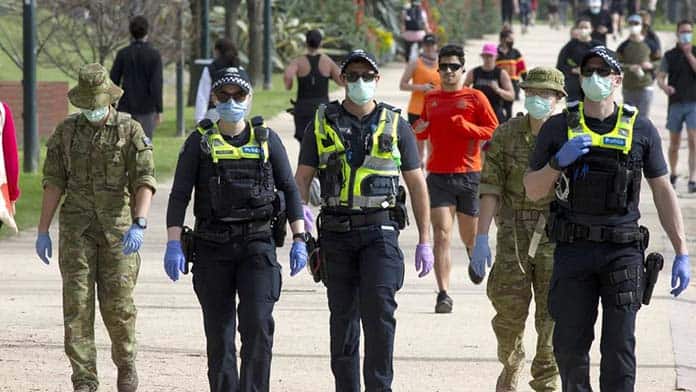 Around 65 per cent of the new cases last week were among workers in hospitals and in aged care. There are clearly still problems with infection control in the health system.

By doing nothing but imposing restrictions, Andrews has handed the initiative to Morrison and the right. Morrison has made it clear that he wants to open the economy, restore business as usual and make ordinary workers pay for the pandemic crisis. He is cutting JobKeeper and JobSeeker payments at the end of September, although unemployment is set to increase even further and Melbourne will still be under lockdown.

The key to lifting lockdown at the earliest possible moment is boosting the state’s contact tracing capacity. This has been acknowledged by the authors of the state government’s own modelling used to justify the timeline for extending restrictions.

The modelling is based on a continuation of Victoria’s existing record on contact tracing over the last two months.

University of Melbourne professor of epidemiology Tony Blakely told The Age, “If we do our contact tracing better than we did three months ago, the contact tracers may be able to hold the case count without it going up again as badly as our model suggests”.

These measures should have been in place months ago—but the government did not properly prepare for the pandemic. Victoria had just 14 contact tracers in place in March.

It was the Andrews government’s failure on contact tracing which allowed the virus to get out of control in the first place, following its escape from the quarantine hotels.

But Daniel Andrews’ roadmap will not see him lift the curfew until new infections are at five cases or less a day over a 14-day average. NSW went three weeks from 26 July with over ten cases of community spread a day and was still able to control the outbreak.

Andrews says that NSW and Victoria can’t be compared, but the figures speak for themselves. South Korea looks to be controlling its most recent spike which reached 440 cases in one day.

The government should be throwing every possible resource at a health response to COVID-19.

Instead it has emphasised the heavy-handed use of police powers to enforce lockdown restrictions.

This authoritarianism, and the moralistic finger pointing that has gone along with it, undermines the social solidarity needed to tackle the pandemic.

Mobile surveillance cameras have been set up in local parks to monitor people exercising. Units have been placed in Victoria Gardens in Prahran, The Age revealed, despite the fact there had been no breaches of the restrictions recorded there.

The Andrews government and the media have circulated stories daily of people fined for throwing parties or getting take-away food, in an effort to blame ordinary people for the spread of the virus.

But Lloyd Murphy, a lawyer with Inner Melbourne Community Legal, told The Guardian “hundreds” had been fined who were allowed to be outside, including people going to the supermarket or exercising.

A number of them were migrants or international students unable to communicate with the police why they were outside. Location data for fines shows that police have, as always, disproportionately targeted working class and ethnic communities.

Last week police spear-tackled an Aboriginal man riding to work on his bike, simply because he didn’t have a light on. He was racially abused and had to seek hospital treatment for his arm.

Others have been fined for stopping when people asked them for directions, or who had obvious mental health issues. “The police aren’t making proper enquiries to determine why the person is not complying”, Ariel Couchman, the head of legal service Youthlaw, said.

Police have now issued over $2.9 million worth of fines for breaching the 8pm to 5am curfew alone. Yet public health experts have admitted there is no medical justification for the curfew. It is simply a measure designed to impose social control, and insist that it is ordinary people who are responsible for the virus.

In July, Daniel Andrews blamed people not at home who were supposed to be quarantining because they were infected or a close contact, claiming that one in four people door-knocked were not at home.

Yet The Guardian revealed in early September that only 42 people had been fined for not being at home during a visit from authorities. And Lloyd Murphy said that some of those fined had been in hotel quarantine when their homes were visited.

“We also have stories of people in the locked-down community housing towers arranging their own hotel accommodation to better isolate from and protect their families, and then police send infringement notices to their homes”, he said.

Andrews’ actions are making it easier for Morrison and the bosses, and harder for workers to fight back.

We need an end to the draconian police powers, and more funding for the health and workplace measures that can create safe workplaces and keep COVID-19 in check.