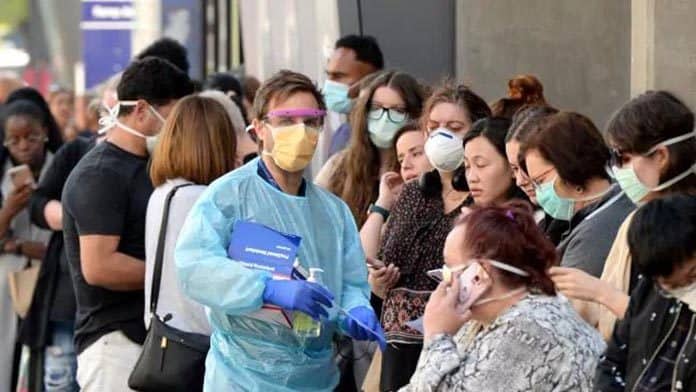 The sickness of capitalism is being revealed on a global scale.

The spread of the coronavirus has created a global health crisis and precipitated a global economic crisis. Australia’s economy was already stalling and is now almost certainly in recession.

There needs to be a massive shift of social resources to maximise the protection of health and living standards of ordinary people.

Morrison’s response fails the test of what is needed. The travel bans initially imposed increased racist attacks particularly against Chinese people and have not stopped the virus spreading here.

Closing borders does not keep us safe and the politics of border control has proven to be a massive distraction from the preparation of the health resources and public education needed to really limit the spread in Australia. Rather than closing borders, we need a rapid increase in the level of international co-operation to meet the global threat of this virus.

This includes material assistance to countries with weaker healthcare systems and taking research and development of treatment out of the hands of multinational corporations into an international public research response.

Instead of a massive social response to protect ordinary people and those most vulnerable to the virus, three-quarters of Morrison’s special budget measures go to big business to protect their profits.

If schools, universities, or workplaces are forced to close, the workers and their families affected should not be the ones who pay the price.

Government cutbacks, both state and federal, already meant that our hospitals were under strain, under-funded and under-staffed. This has to be urgently turned around.

Both Morrison and the state governments have failed to deliver the massive expansion of health services that is needed to deal with the growing coronavirus crisis.

There needs to be an immediate ramping up of testing measures to detect those that have the virus and ensure all those potentially exposed are able to be easily tested. China is testing 1.6 million people a week; South Korea is testing more than 10,000 a day.

Hospitals here are already facing shortages of testing equipment. Morrison this week promised more funding for fever clinics but planning should have begun weeks ago.

It is irresponsible of Morrison not to be tested following his contact with Peter Dutton, who caught the virus in the US. But it is a symptom of his failure to understand the social measures that are needed to respond.

There needs to be a dramatic and sustained expansion of hospital services. Although coronavirus is a mild disease for most people, experience elsewhere suggests 20 per cent of those affected may need hospital care. The different death rates in different countries are largely accounted for by the differences in detection and availability of treatment.

The beds and resources of private hospitals (including their intensive care units) need to be commandeered if necessary. Morrison can’t sit on his hands as he did during the bushfire crisis. The field hospitals and medical resources of the military must also be made available.

Despite the obvious risks to the elderly in nursing homes, neither Morrison nor the state governments are promising the kind of increase in staffing, guaranteed nurse to patient ratios, or increase in testing that is the key to containing the virus.

There is also a need for more resources to protect other groups at high risk. In 2011 Indigenous people made up 11 per cent of the cases when swine flu hit the country and died at a rate six times that of others. Poverty, overcrowded housing and higher rates of other illnesses in Indigenous communities put them at significant risk.

All workers, including the 3.3 million in Australia who do not have access to paid sick leave, must get paid leave if they are sick or need to self-isolate.

It is shocking that Business NSW is circulating advice to employers that they do not have to provide paid leave to permanent workers forced into isolation if they are not yet sick.

Morrison has waived a one-week wait for Centrelink’s sickness benefit to casual workers. But this pays just $559 a fortnight. And imposing the draconian assets test means millions of casual workers whose jobs are at risk and do not have access to sick leave will see no benefit. The failure to provide even a minimum of 14 days’ paid leave for everyone who needs it compounds the economic impact on workers and creates a significant health risk.

Workers who self-isolate will not have their incomes protected, making it more likely that people who should stay at home will still be forced to work.

But governments are increasingly resorting to forced closures of one sort or another. It makes sense to temporarily close a school or workplace where coronavirus is detected to allow time to test anyone potentially exposed and isolate those who have the virus.

While there can be a medical rationale for some cancellations of work, study or other gatherings, the main emphasis must be on testing and medical care.

Government bans or police action to force people to stay in their homes, or stop leaving cities, can kill the social solidarity needed to meet the threat and place far too much power in the hands of governments that do not have our interests at heart.

South Korea has been able to bring the virus under control without the lockdown of cities and restrictions on movement in some areas of China, through widespread and sustained testing, including drive through testing centres.

Without widespread testing the virus will simply take off again when the lockdown is lifted.

Lockdowns are also a means of social control and a way of making a sweeping authoritarian gesture to present the government as in control of the situation.

The government ban on static public gatherings of 500 people or more is selective and hypocritical. Thousands of people will still be crammed into trains and buses every morning and large workplaces will continue to operate.

Some people see a restriction on social gatherings as a way of slowing the spread of the virus, and have called off meetings and rallies. This is understandable when people have no confidence that Morrison will effectively respond to the threat of the virus.

But political rallies and meetings are not the primary way the virus is spread, and will be needed to fight for proper health care. We should oppose moves to ban rallies or political organising.

Morrison justifies the selective decision by saying, “parliament is essential; school is essential and work is essential”.   For the working class, rallies and protest are also essential or we will leave our fate to those who care more for profits than the health of ordinary people.

At the University of Sydney, management is saying that lectures and classes will go ahead but that other events, including union meetings, should be cancelled. Any restriction on union meetings and rallies should be resisted. We will need protests on the campuses to win safe conditions and ensure workers don’t pay.

There is arguably more risk in a closed lecture-room or workplace that an open air rally.  Protecting our political rights is crucial to ensuring that we are able to protect our health and our lives from those who are only concerned with maintaining their system and their privileges and profits.