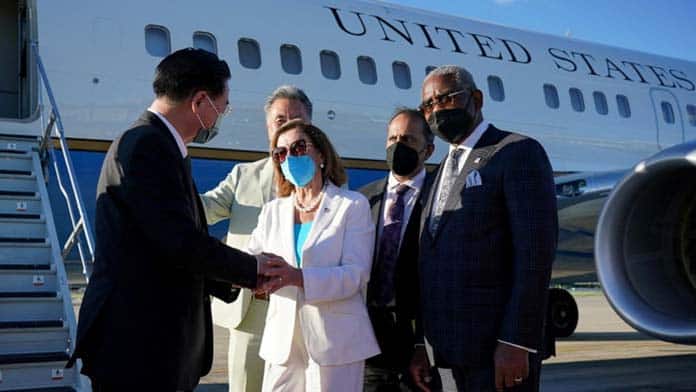 Nancy Pelosi’s provocative visit to Taiwan in August has signalled a dangerous new phase in the rivalry between the US and China.

Pelosi—the Speaker of the US House of Representatives—is the most prominent US official to visit Taiwan in 25 years.

China vehemently objected to the visit. The official US policy on Taiwan has been dubbed “strategic ambiguity”. The US formally recognises the “One China” principle which states that Taiwan is part of China.

The mainstream media simply blamed China for heightening tensions. But Pelosi’s visit is just the latest US escalation over Taiwan.

In May Joe Biden was asked whether the US was, “willing to get involved militarily to defend Taiwan if it comes to that?” His blunt reply was “Yes”. This pointed departure from official US policy was designed to send a message to China—the US is willing to go to war over Taiwan.

The Pelosi visit took things a big and dangerous step further. Knowing the visit would provoke a hostile response from China, the US moved an aircraft carrier into position near Taiwan, as well as mobilising two warships and a number of F-35 fighter jets.

Pelosi said during her visit that, “our delegation… came to Taiwan to make unequivocally clear we will not abandon our commitment to Taiwan.” The mobilisation of US military might accompanying it made it abundantly clear what this meant—that the US was willing to use force to maintain its dominance in the region.

The danger involved in such an escalation is immense. War between the two nuclear powers would be an unthinkable catastrophe.

Ahead of the visit China’s Foreign Affairs spokesperson Zhao Lijian said, “The People’s Liberation Army will never sit by idly.” Over 20 Chinese fighter jets entered Taiwan’s air defence identification zone in the lead up to Pelosi’s arrival. This was followed by live fire military drills, including missile strikes in waters off Taiwan.

Taiwan’s contested status is a legacy of past imperialist interventions. Western-backed Nationalists retreated to Taiwan following their defeat by Mao’s Communist Party in the Chinese civil war in 1949.

The current US policy of “strategic ambiguity” emerged in 1972 in the Nixon era. President Richard Nixon sought to normalise relations with China to draw them out of the orbit of the USSR during the Cold War.

Taiwan occupies a strategic location. China is highly dependent on sea lanes for trade and imports of strategic commodities like oil. In the event of war the US would try to use control along the “first island chain” off China’s coast, including Taiwan, Japan, the Philippines and the island of Borneo to impose a naval blockade.

Pelosi’s stunt in Taiwan shows that US imperialism has been emboldened by its proxy war in Ukraine. Following its humiliating defeat in Afghanistan, the US is pouring tens of billions of dollars of weapons into Ukraine to weaken Russia and prove its ability as an imperialist bully to use force to get its way.

Anthony Albanese remained relatively tight lipped about Pelosi’s provocation, saying it is “a matter for them”. But his actions spoke louder than his words. As Pelosi addressed the press in Taiwan, Albanese and Defence Minister Richard Marles announced a comprehensive re-assessment of Australia’s Defence Force.

The message was clear—that Australia is preparing for war. Albanese is committed to Scott Morrison’s policy of $270 billion defence spending in the next decade as well as to the AUKUS Alliance and the acquisition of nuclear-powered subs at a cost of $170 billion. The review will likely entrench the shift towards acquiring weapons directed at China, such as missile systems.

Taiwan will continue to be a flashpoint in a region that is increasingly a tinderbox of imperialist tensions.

Another delegation of US politicians arrived in Taiwan 12 days after Pelosi’s visit, led by Democratic Senator Ed Markey, chair of the Senate Foreign Relations East Asia, Pacific, and International Cybersecurity sub-committee. Chinese aircraft have continued to cross the midpoint of the Taiwan Strait regularly, despite the official end of military exercises.

As inflation skyrockets globally the obscenity of this imperialist jockeying is laid bare.

Governments are spending billions on war and risking nuclear conflict while ordinary people struggle for the most basic necessities. It is more important than ever that we fight their system and build movement in Australia against the military alliance with the US, Labor’s militarism and the drive to war on China.