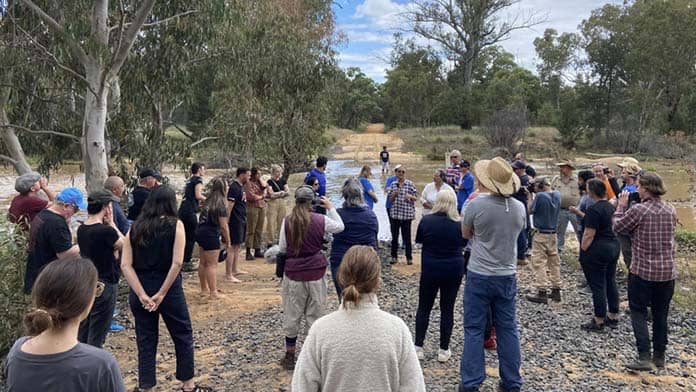 A delegation of 50 trade union officials and rank-and-file members visited Coonabarabran and the Pilliga Forest on 6 November, to hear first-hand from Gomeroi leaders about their struggle against the Santos Pilliga/Narrabri gas project.

The Pilliga is the largest remaining temperate forest in eastern Australia. Gomeroi women Suellyn Tighe and Deb Briggs shared with delegates some important cultural features of the landscape and the waterways, with the Pilliga acting as a vital recharge zone for the Great Artesian Basin. This is all being threatened by Santos’ climate-wrecking plans to drill 850 coal-seam gas wells, which would also release 127 million tonnes of CO2 equivalent into the atmosphere.

Unions NSW Assistant Secretary Vanessa Seagrove, who helped lead the delegation, said, “This weekend has shown me first-hand how important this land is culturally but also what this would do to the environment. It cannot go ahead and we will continue to fight alongside the Gomeroi People for as long as it takes.”

Gomeroi have a registered Native Title claim over the Pilliga. Long-term opposition to coal-seam gas was formalised in a vote of the Gomeroi Nation in March 2022, which rejected Santos’ offer of compensation in exchange for Gomeroi consent.

Santos has filed four “Future Acts Determination Applications” (FADAs) in the Native Title Tribunal (NTT), seeking to proceed with the project despite Gomeroi opposition. An NTT hearing was held in April, but no decision has been issued. The NTT has rejected only three such FADAs in the past 30 years.

A multi-union media statement was issued following the delegation, pledging that if the NTT does not uphold Gomeroi rights, unions will support a fight that will stop Santos on the ground. Paul Keating, Sydney Branch Secretary of the MUA, said: “We have committed to ongoing solidarity and direct action, including blockades, involving our members and the entire trade union movement.”

The delegation included nurses from Sydney and Coonabarabran, teachers’ union representatives from across NSW, manufacturing and maintenance workers, maritime workers from Newcastle and Sydney and university staff.

Significantly, blue collar unions with members working in the gas industry got behind the delegation, with representatives attending from the AMWU and active support from the ETU and the construction division of the CFMEU.

This raises the prospect of a union “green ban” being placed on the Santos development. The ETU have already pledged that none of their members will work on the site.

Gomeroi activists and supporters, including Workers for Climate Action in Sydney, have worked for more than two years to build support in the union movement.

MUA National Indigenous Officer Thomas Mayor attended an action conference in the Pilliga in March and pledged to build support across the movement. MUA delegate Natalie Wasley attended the Gomeroi Nation meeting that voted against any deal with Santos, handing out statements promising union backing if Gomeroi rejected Santos’ offer.

The delegation came on the heels of an important vote at Unions NSW to reaffirm a motion condemning the court action by Santos to over-ride Gomeroi rights stating that:

“This kind of behaviour from mining companies has been repeated again and again over the course of colonisation of what is now known as Australia. This must stop now.”

The motion also committed to “support the Gomeroi people will all means available to us”. Instead of coal-seam gas, Unions NSW is calling for “sustainable employment and renewable energy development in the region, with appropriate public investment and industry planning”.

The motion was originally passed by the Unions NSW Executive in April, but in November the AWU sought to have the Unions NSW Council overturn it. One hundred and fifty union reps turned up for the meeting and the AWU’s motion failed 73 votes to 54. The Mining and Energy Union and the SDA supported the AWU in the vote.

The AWU argued that the gas supply and price crisis meant that more gas supplies were needed, but this was rejected by speakers from the AMWU and others, who pointed to huge gas exports and industry profits.

From the Gurindji walk-off in 1966, through to the campaign that stopped the nuclear waste dump on Aboriginal land in the NT in 2014, trade unions have been an important source of support for Aboriginal people fighting for rights to control their lands. Union power will also be crucial in the fight for a just transition, to meet the existential threats posed by the climate crisis.

We need to build on the momentum created through the powerful delegation, increase pressure on the Albanese government to reject the Santos project and prepare to mobilise if the Native Title Tribunal rules against Gomeroi rights.