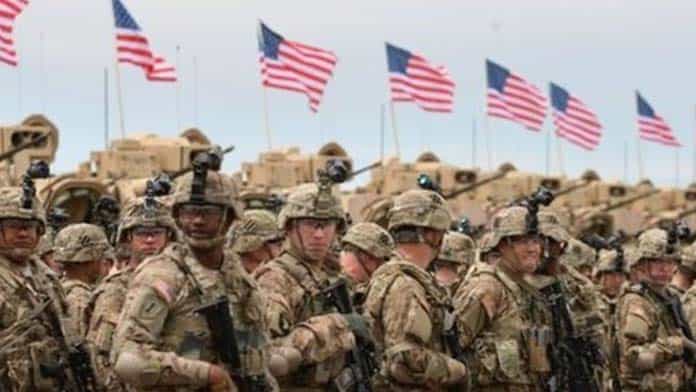 We are all now faced with perhaps the most dangerous situation in the world since 1945.

The most powerful military in the world has declared its intention to destroy the government of its main rival. In pursuit of that objective, it is sending battle fleets to the South China Sea to challenge Chinese influence and escalate military tensions.

This is all backed up by one of the most shamelessly hypocritical propaganda campaigns ever waged.

The government that gave itself the right to assassinate inconvenient foreign leaders (Mossadeq of Iran, Ngo Dinh Diem of Vietnam, Trujillo of the Dominican Republic, Suleimani of Iran and many others), not to mention the many attempts it botched (Lumumba of the Congo; Castro of Cuba) condemns Chinese election meddling.

The government that invaded Iraq against all the tenets of international law, that has imposed sanctions on judges of the International Criminal Court in order to frustrate its attempts to investigate war crimes in Palestine, demands China obey international law.

But American hypocrisy is just the sideshow; it’s the ramped-up military and economic rivalry that threatens our very survival.

How are we to understand it?

The defeat of the Soviet Union in the Cold War left the United States as the sole superpower, a position it resolved to maintain. Its National Security Strategy of 2002 explicitly stated that its “forces will be strong enough to dissuade potential adversaries from pursuing a military build-up in hopes of surpassing, or equaling, the power of the United States.”

Even then, hawks in the American Establishment publicly raged against China’s growing power.

Since then, China’s economy has grown at a rate, rarely equaled in human history. One result is that American economic dominance has dramatically declined.

In 2001, when China joined the World Trade Organisation (with the enthusiastic support of the Howard government), the American economy was eight times as big as China’s. In 2019, it was just 50 per cent bigger, based on official exchange rates.

If you believe that China’s exchange rate is held down by the government (a favourite Trump complaint), the comparison is even more disturbing for US bosses. The purchasing power of China’s economy is now 30 per cent more than America’s.

And with the criminal lunacy of Trump’s response to the COVID19 pandemic, that gap has grown rapidly in 2020.

While American manufacturers bleat about being out-competed by China, in Washington, China’s economic development is a strategic problem, a military issue.

This “threat” was well summed up by John Mearsheimer, one of the world’s best-known international relations academics and a conservative advocate for American dominance. In his 2014 book, The tragedy of great power politics, he wrote:

China’s economic growth is a strategic threat, irrespective of what the Chinese government or military actually do; because of the potential threat involved.

It was also the situation the world’s people faced in 1914, when the great powers of the world went to war to protect and expand their markets, and prevent their rivals gaining domination.

The unspeakable horror of that bloodbath, of ten million young people shot and bayoneted and blown up by other young people in the mud of trenches that barely moved, created utter despair in society. Tens of millions demanded answers: how could this nightmare have happened? How could our leaders have actually planned this, because you don’t get armies and navies and weapons and destroyers without planning and money.

The most powerful answer came from the Russian revolutionary socialist, Nikolai Bukharin, who argued that it was precisely the explosive growth of capitalist commodity production and finance that drove businesses to seek out raw materials and markets globally. But to secure their investments and contracts, they sought the protection of a strong military.

And in a very real sense, the winners were the group of states who could together produce the most guns, the most bombs, the most warships.

Britain had the strongest military and the biggest empire. Germany’s industries became progressively more sophisticated and productive, but they lacked the markets and reliable raw materials that empire had given their British competitors.

The great power with a small empire wanted the world redivided at the expense of the great power with the big empire. The state promoted manufacturing, both for economic gains and as the infrastructure to support a war machine. As war became more likely, Britain ramped up its military production.

With the rise of globalisation, many on the left dismissed the Marxist theory of imperialism as outdated. Rather than use its economic and military power to keep them down, American imperialism had assisted the economic recovery of its former enemies, Germany and Japan.

But trade is always political, and American military and economic dominance was the precondition for the WTO.

American capitalists and the American state believed, with good reason, that while intensified global competition (central to the neoliberal agenda) would benefit all the rich, advanced, western economies, it would benefit them the most.

They were only half-right. While American capitalists were big winners from globalisation, Chinese bosses and the Chinese state won far, far more.

China now produces half of all the steel in the world; the US less than 10 per cent. Two years ago, China produced 28.4 per cent of the world’s manufactured goods by value, compared with 16.6 per cent in the US. And as we have found out in the pandemic, China is the world’s producer of face masks and a lot of the world’s medical equipment.

Chinese bosses have done this by the most ruthless exploitation of the displaced rural poor, driven into massive new cities desperately searching for work.

Just as in 1914, the dominant military power with the biggest empire faces a new rival with a dynamic economy and a much larger population.

Alarmist? Even Kevin Rudd has started warning about the real possibility of a shooting war, most recently in a widely-read article in America’s Foreign Affairs magazine.

The American ruling class is particularly disturbed by the dramatic progress China’s industries have made in high technology. Its high-speed rail system (something way beyond the capacity of the Australian government) is bigger than all others in the world put together, and China is now designing its own next-generation trains.

Its people have been using smartphone payments for half a decade, way in advance of the US or Europe. In cities without extensive underground rail networks, electric bikes are widely owned. And its facial recognition technology is notorious.

Made in China 2025 is a strategy aimed at gaining global ascendancy in ten areas of high tech production, including robotics, autonomous and electric vehicles, artificial intelligence, biotech, aviation, green energy and more.

Even if that strategy succeeds, it will still be a long way behind the US and European industries, but it is catching up fast. And these industries and technologies are central to modern warfare as well as modern commodity production and finance.

Alongside its economic rise, China’s rulers have launched an ambitious strategy, the Belt and Road initiative, to expand their own areas of influence. Washington is hysterical.

People outside the US can sometimes be mesmerised by the sheer narcissism of Trump; but on this issue he has largely got the support of the Democrats and much of the wider Establishment, including the liberal media.

Scott Morrison, like Malcolm Turnbull before him, has marched largely in lock-step with Washington; and led the way with the ban on Huawei. Despite Australian companies’  economic dependence on Chinese markets, Australia’s rulers depend far more on US and British capitalists for investment and finance, and have long seen their political and strategic interests in the region as tied up with US dominance.

A measure of how serious the situation is can be gathered by the way Morrison introduced the government’s new Defence Strategic update, describing the current situation as just like the 1930s and boasting of the massive increase in money for weapons. Or the way The Australian newspaper greeted the update: “Australia must be up for conventional war” was the headline on their staff writer’s report.

A series of articles went on to demand even more money for the military: “If we’re sliding towards conflict then the money must flow”; “We’re going to need a defence force with real bite”; “Australia’s best defence is a good offence as China flexes muscles in region”; “Pax Americana is still our best hope”; “Scott Morrison is right: we need to defend ourselves”.

We do need to defend ourselves; from Scott Morrison and the nasty bosses he rules for.

In 1915, in the midst of despair that workers were killing each other to advance the imperial ambitions of their exploiters and oppressors, Bukharin, Lenin, Rosa Luxemburg, John Maclean, Tom Barker and countless other socialists, argued that the way out from war was for the ordinary people of the world to turn against their bosses and their generals.

It was no pipedream. In the middle of the war, Australian workers twice voted against conscription, and launched one of the biggest strikes in our history. A mutiny by German sailors and an uprising by German workers unexpectedly ended the war in November 1918.

Today, nothing fundamental has changed.

Millions of ordinary Australians have long distrusted American imperialism. The campaign for an invasion of Iraq in 2003 was met by some of the largest demonstrations in our history, along with massive protests in the US and around the world.

That movement failed because it lacked sufficient determination to fight on; and too few understood the roots of American imperialism in the capitalist system.

Today, in the wake of the Global Financial Crisis there is enormously greater anger at the misery imposed by capitalism, especially in the US.

The inspiring Black Lives Matter movement, the growing resistance to vicious employers in the US, are all grounds on which an anti-war, anti-imperialist movement can be built there.

Our interests too lie in tearing down American imperialism and stopping the military build-up of our rulers; along with the rotten system that spawned them.