US humiliated in Afghanistan as Taliban seizes Kabul 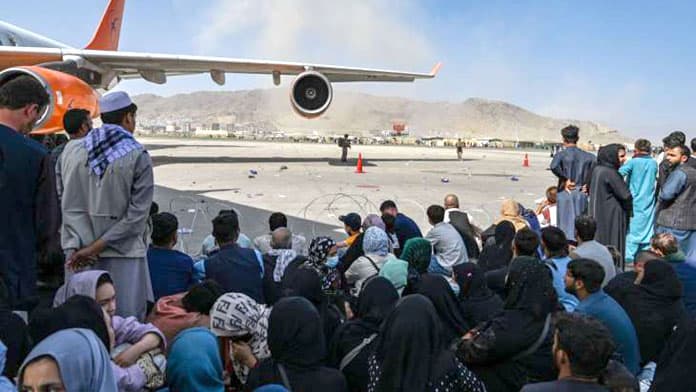 The 20-year occupation of Afghanistan has ended in a major defeat for the US and its allies.

The Taliban’s seizure of power has left the US and its allies humiliated, scrambling to organise evacuations by air.

When US President Joe Biden announced the final US withdrawal in July, he said confidently: “The likelihood there’s going to be the Taliban overrunning everything and owning the whole country is highly unlikely.”

But the 300,000-strong Afghan National Defence and Security Forces simply disintegrated in the face of Taliban advance.

The Taliban are a brutal force. But it is the violence, war crimes and corruption of the occupation over 20 years that has led to their return to power.

The bombing and invasion of Afghanistan was the US’s first response to 9/11, followed soon after with the invasion of Iraq in 2003. The invasion in 2001 was presented as a “good war” that would hunt down Osama bin Laden, end terrorism, liberate Afghans from the Taliban and bring women’s rights and democracy to the country. But the reality was horrific violence and corruption.

The US spent over $2 trillion on the conflict and left around 250,000 Afghans dead, hundreds of thousands maimed and the population impoverished.

The puppet government installed by the US was a corrupt kleptocracy propped up by warlords every bit as bad as the Taliban and riddled with opportunist expatriates feeding at the trough of the occupiers.

This is why the Afghan state disintegrated in the face of the Taliban offensive. In August warlords switched sides or surrendered, demoralised troops deserted and elites fled like rats from a sinking ship.

Despite the Australian government’s professed concern for the Afghan people, for 20 years successive governments have used the cover of the “war on terror” to demonise those fleeing wars and persecution.

They continue to hold Afghan refugees in detention and have blocked the families of those here on Temporary Protection Visas from coming to join them. Scott Morrison should act now to evacuate them as part of an emergency intake of Afghan refugees.

Imperialism and the Taliban

The US invasion was a continuation of a long running history of self-interested and destructive imperialist interference.

Following the Soviet invasion of Afghanistan in 1979, the US supported and armed mujahideen fighters to curb Soviet influence, with the help of Pakistan. Militant Islamists received the strongest support.

A brutal period of civil war among the mujahideen followed the Soviet withdrawal in 1989.
The Taliban formed among displaced Afghans in Pakistani refugee camps, with the backing of Pakistan’s Inter-Services Intelligence and the quiet support of the US. The Americans wanted a stable regime in Afghanistan, hoping they could run an oil pipeline through the country from central Asia.

Following the 9/11 attacks, the Taliban’s harbouring of Osama Bin Laden became the pretext for invasion. But the war in Afghanistan and the “war on terror” was part of a US plan to assert control across the whole region, establish a string of new military bases and take control of the oil in Iraq and even Iran, to cement the US as an unassailable global power.

US defeat and withdrawal from both Afghanistan and Iraq has reduced this ambition to dust and is a sign of the decline of US power.

The US toppled the Taliban when they invaded but the occupation fed their resurgence.

Rhetoric about bringing “freedom” to Afghanistan stood in stark contrast to the reality—massacres, executions and torture carried out by US, Australian and NATO forces. According to the Brereton Report into war crimes, Australian soldiers alone were complicit in the murders of 39 non-combatants.

As the conflict dragged on the US increasingly relied on indiscriminate air-strikes, which reduced US casualties but increased civilian deaths. A 2019 survey of Taliban fighters pointed out, “Airstrikes and night raids only provided fodder for the Taliban’s recruitment of new fighters.”

That year the US dropped 7362 bombs and in the first half of 2019 Afghan and US forces killed more civilians than insurgents.

The US threw a gargantuan sum of money at the occupation, spending over $900 billion on “nation building” alone.

While this delivered some limited gains in reducing infant mortality, school attendance and economic growth, the majority of the money was swallowed up by corruption, bribery and fraud.

Analysis from a forensic accountant who worked for the US military from 2010 to 2012 shows that of 3000 Defence Department contracts worth $106 billion, at least 40 per cent ended up in the pockets of warlords, drug traffickers and corrupt Afghan officials.

The US chose as allies notorious militia and security officials accused of sexual assault, torture, corruption and murder, leaving ordinary Afghans disillusioned with the US-backed administration.

Corruption also accelerated the collapse of the Afghan army. Many of the 300,000 Afghan government soldiers fled, unwilling to sacrifice their lives for a discredited government. But others were non-existent “paper soldiers”, invented so corrupt officials could pocket their wages.

The war in Afghanistan was never a “good war”. Liberation cannot come through foreign invasion. The invasion and occupation has inflicted decades of suffering and death on the Afghan people and paved the way for the Taliban to return to power.