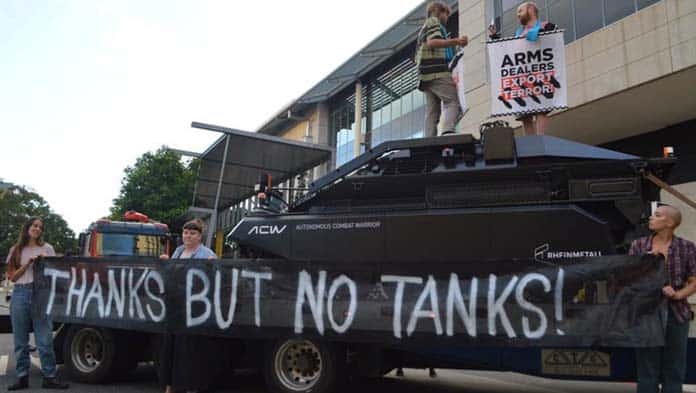 The Australian Government is still banging the drums of war against China. Labor Defence Minister Richard Marles argued on a recent trip to the US that Australia and the US must work together to “counter aggression”.

The Labor government is continuing the aggressive escalation of Australian war capabilities kick-started by recent Liberal governments. Their aim is to limit the rise of Chinese power in the region and maintain Australia’s dominant role in the South Pacific and our alliance with the United States as the dominant world power.

The Australian government is preparing for the very real possibility of war in the region.

In its 2016 Defence White Paper, the Turnbull government committed to an 81 per cent increase in the Defence budget over a decade.

Former Prime Minister Scott Morrison set in train the increase in the size of the Australian Defence Force by 30 per cent by 2040—to its largest size since the Vietnam War in the 1970s.

The Australian government is also massively increasing its purchases of military hardware, at a cost of $270 billion over ten years, in an extraordinary escalation of funding for weapons.

At the centre of their military investment is the AUKUS military agreement with the US and UK announced last year to acquire nuclear-powered submarines at the additional cost of $170 billion.

The government also announced plans for a $10 billion east coast base for the subs in either Port Kembla, Newcastle or Brisbane.

Labor has been keen to show that they are embracing the militarism of previous Liberal governments.

Marles has welcomed AUKUS, stating that, “The heart of deterrence is undersea capability.” He has been clear about the government’s plan to massively expand the range and lethal capability of Australia’s military. “This will include capabilities such as long-range strike weapons, cyber capabilities, and area-denial systems tailored to a broader range of threats.”

He also accepts that, “This will, in turn, require deeper engagement with industry to accelerate capability development and strengthen our supply chains.”

Marles has used the term “supply chain integration”, which means the government stepping in to plan and develop the military and weapons capacity in Australian industry. This is so Australia can play a leading role in pursuing war in the region relative to the growth of Chinese military capabilities.

Up to now, Australia has focused on importing particularly US military technology but is creating much more locally based war technology production.

This has twin aims—first to play a part building and sustaining Australia’s expanded military needs. According to the government-funded Australian Strategic Policy Institute (ASPI), the domestic arms industry can supply up to 40 per cent of the Defence department’s acquisition budget, which “will grow to around $11 billion per year by 2029–30, up from less than $2.5 billion in 2018–19”.

“When we add acquisition and sustainment together,” which includes the cost of upkeep for the new hardware, ASPI estimates that, “the Australian defence industry is heading towards being a $24–25 billion per year enterprise.”

Second, the government aims to establish Australia as a much more significant arms exporter.

Former Prime Minister Malcolm Turnbull announced a $3.8 billion investment into the local arms production industry in 2018, hoping to establish Australia as one of the top ten global arms exporters.

Australia will play an increasing role in supplying weapons across the world which are used to killed civilians. In 2017-18 Australia’s export permits were worth $1.5 billion. By 2019-20, it had grown to nearly $5.5 billion.

Under Freedom of Information laws, The Guardian found that in 2018-19 Australia issued export permits to the UAE and Saudi Arabia. The UAE and the Saudis have used Yemen as a battle ground for their struggle for power in the region, conducting indiscriminate air strikes. More than 17,500 civilians were killed in the bombing campaigns between 2015-19.

Australia is developing a local guided missiles industry, with $1 billion of funding announced by former Prime Minister Scott Morrison in March going to the local arms of US companies Raytheon and Lockheed Martin. A new missiles factory is being constructed by Lockheed in collaboration with French company Thales at Mulwala in NSW.

Marles said that, in addition, Australia’s new “guided weapons stores would establish a second source of critical munitions supply to the United States”.

Korean subsidiary Hanwha Defense Australia is building howitzers and ammunition resupply vehicles at a facility near Geelong it calls the “Armoured Vehicle Centre of Excellence”.

The factory is also in the running to manufacture land warfare vehicles at a cost of many billions.

The growing Australian military manufacturing industry will also supply components to the US and UK military, which are trying to also ramp up submarine construction.

BAE Systems Australia already provides Nulka decoy rockets that protect US capital ships from missile attack, Austal builds aluminium and steel ships for the US navy in Alabama, and numerous companies have established in the US such as Electro Optic Systems, which manufactures remote weapons stations for the US army.

Australia sees its alliance with the US as a giving it access to shared military technology and weapons.

Since 2016, for instance, Australia has also been developing and funding autonomous weapon systems also known as “killer robots”, which are so insidious that the New Zealand government has been campaigning for their international regulation.

In 2019, the Defence Innovation Hub awarded contracts with a combined value of $15.1 million to nine Australian businesses and universities to develop “innovative defence technologies”.

In 2021, the University of Sydney stopped offering its Peace and Conflict masters program, one of the only degrees on peace in the country. As university programs were slashed across Australia, not one cut their degrees on war. Research funding has been re-directed into military and defence research.

The Australian government has created partnerships with universities for them to become research centres for weapons. There are 32 universities partnering in a “Defence Science Partnership Program”.

In 2016, Lockheed Martin contributed $13 million to the University of Melbourne and RMIT to create a defence research hub. Lockheed Martin is one of the world’s largest arms companies, manufacturing aircraft, satellites, as well as nuclear weapons and missiles.

It is known for corruption and political lobbying, with senior officers found to have coordinated a “program of foreign bribery” in the 1970s. It sells weapons to regimes notorious for war crimes such as Israel and Saudi Arabia.

The US Studies Centre at the University of Sydney receives funding from Raytheon, a US weapons manufacturer.

University workers have been rightly concerned about this. Academics have spoken out in concern about academic freedom as universities are increasingly tied to funding by weapons companies, with the potential need for universities to show “military value” to receive funding.

The Australian state is massively ramping up its ability to wage military conflict.

The research, purchase and development of deadly weaponry needs to be opposed.

Australian and US concern about China is not defensive. The biggest warmongers and aggressors of recent decades have been the US and Western governments.

Western governments waged two decades of war in the oil-rich Middle East in Iraq and Afghanistan in attempt to extend their imperialist power. At least one million people died in Iraq alone.

They share responsibility for the outbreak of war in Ukraine given their efforts to humble Putin and Russian power and extend their own control over Eastern Europe. They are now feeding the killing through pumping in billions of dollars in advanced weapons to send a message to China.

We are at a dangerous precipice of conflict in Asia between the world’s strongest imperialist powers in the US and China. Australia’s military build-up and the recent AUKUS agreement is making this more likely.

We need to rebuild an anti-war movement that understands the need to oppose all these connected escalations of Australian militarism, from defence research on universities, to the AUKUS deal, to opposing racism and war against China.