Duterte pivots from US to China to play off both powers 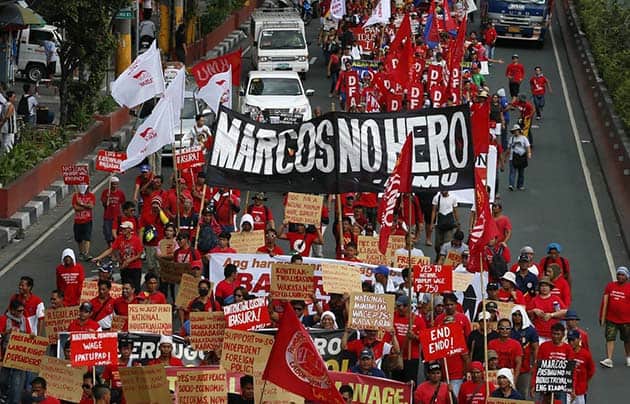 After months of growing tension between the Philippines and the US, Filipino president Rodrigo Duterte announced in late October he was cutting ties with the US, one of the Philippine’s closest allies, and leading a pivot towards China. Addressing a meeting of Filipino and Chinese businessmen in Beijing, Duterte stated, “I announce my separation from the United States, both in military and economics also.”

Duterte, who was elected in May, had already announced that there would be no more joint US military exercises with the Philippines.

In May, Filipino Defense Secretary Delfin Lorenzana was quick to reassure the US that the US security alliance would not be scrapped. Similarly, after Duterte’s declaration in Beijing, Secretary of Trade and Industry Ramon Lopez, stated, “We definitely won’t stop the trade and investment activities with the West, specifically the US.”

Duterte’s zig-zagging has caused consternation in the Philippines and in the White House. Under Obama, the US has sought to counter China’s influence in the Asia Pacific region. Losing the Philippines would be a blow to America’s strength there.

Duterte is trying to play off the two superpowers to his advantage; there is nothing consistent in his opposition to US imperialism. Concerned to maintain his “tough guy” image, Duterte called Obama “a son of a whore” after the US criticised Duterte for the serious human rights breaches committed since he was elected.

By cosying up to China, Duterte hopes to gain greater Chinese investment—deals worth US$24 billion were signed—and some concessions from China on territory disputes in the South China Sea.

Before Duterte was elected, the Philippines won a legal ruling at the Hague against China’s claims over territory in the South China Sea—but Duterte has not pushed the issue with China.

In return, China has allowed Filipino fishermen to return to their traditional fishing grounds at Scarborough Shoal for the first time since 2012.

But Duterte has also back-pedalled on his anti-US stance. In November he approved the continuation of military exercises and the Enhanced Defence Cooperation Agreement (EDCA) between the two countries.

Trump’s election as US president has also seen Duterte move closer to maintenance of the US-Philippine alliance.

Duterte and Trump have been likened for their lewd comments on women, crass language and anti-establishment image. Both have been the beneficiaries of anger at elite politics but are not offering a progressive alternative.

Duterte welcomed Trump’s victory, saying, unlike Obama, Trump had not commented about his government’s human rights abuses. Trump, however, has labelled several nations, including the Philippines, as “terrorist nations” from which the US should bar immigrants. Any curb on foreign workers would hit the Philippines hard. Remittances from Filipino workers in the US are a significant part of the Filipino economy.

But Trump has also said that he will expand the US military, adding some 80 warships to the US Navy to counter China’s military presence in the South China Sea and elsewhere. Although Trump has said that allies such as Japan and South Korea should pay more to maintain US military protection, there is no sign that he is likely to downgrade the US role in the region.

Duterte was elected in May on the back of widespread frustration among Filipinos at the established political parties. He spoke to people’s fears and experiences of widening income inequality, the struggle for jobs and rising crime. But despite his popularity, Duterte is no anti-imperialist and no friend of the people.

Duterte’s “war on drugs” has resulted in thousands of deaths at the hands of police hit-squads, while others have been victims of vigilante-style killings. Duterte has revoltingly compared himself to Hitler, saying he wants to kill millions of drug addicts as Hitler killed Jews.

Much of the left have turned a blind eye to Duterte’s drug-war killings in the hope he represented a break with the corruption and human rights abuses of the Filipino oligarchs and trapos (traditional politicians). But there are signs that the initial tolerance for Duterte is running out.

Angry protests have erupted since the Supreme Court ruled in favour of the government policy to allow the burial of the Filipino dictator Marcos in Manila’s “Cemetery of Heroes”. Duterte is understood to be repaying the Marcos family for their electoral support for him.

The burial is an insult to the Filipinos still demanding justice for the abuses of the Marcos regime, which was toppled in a people power revolution in 1986. Over 20,000 people demonstrated at the Peoples’ Power monument on 30 November, calling for the dictator’s body to be “dug up”. According to one protester, Duterte has shown himself to be “just a rotten trapo.”