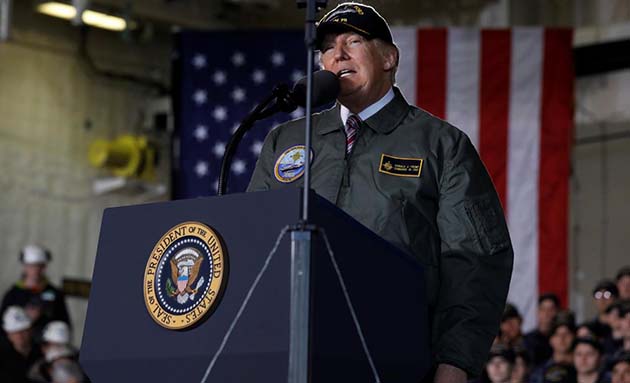 The decline of US power has led to increased imperialist tensions and war, with the rise of Donald Trump a new element of instability, writes James Supple.

North Korea’s determination to develop nuclear weapons, and US President Donald Trump’s continual threats against them, have produced a deepening stand-off.

The North’s Kim Jong-un recognises that actually striking the US or its allies would be an act of suicide, with US retaliation certain to topple the regime.

But Trump’s threat of “fire and the fury like the world has never seen” should they keep up their boasts about firing missiles only takes the two sides closer to actual war.

Malcolm Turnbull has added to the sabre rattling by pledging that Australia would join a war should North Korea attack the US.

The North Korean crisis is caught up in the game of imperialist rivalry, with China supporting the existence of the regime as a buffer state between the US troops in South Korea and its own territory.

Trump’s election has added a new note of unpredictability and danger to these power games.

Tensions and conflicts between the world’s powers are structured into the capitalist system.

The key to understanding this is the Marxist theory of imperialism pioneered by the Russian revolutionary Nikolai Bukharin around the time of the First World War.

Today’s giant multinational corporations compete with each other for control of markets and resources on a global scale.

But the vast majority of them are still based in a single country, with a large portion of their product sales or production based there.

Companies use the assistance of the state in their home country to advance their interests internationally through diplomacy and trade deals, backed ultimately by the threat of military force.

This means imperialist competition is not simply an issue of the strongest power, the US, attempting to dominate everyone else. Imperialism is a system where all the large states compete to advance their own distinct interests.

Although we live in an increasingly globalised world, the power of nation states has not disappeared, as some predicted. In fact the world has become more chaotic and conflict prone, with increased tensions between rival powers.

One reason for this is that the US, the world’s dominant power, is in long-term economic decline relative to its rivals.

At the end of the Second World War the US was responsible for half of the world’s manufacturing.

Its combined military and economic strength meant it could construct a global free trade system that benefited the US, forcing other countries to remove barriers against its goods.

But during the post-war boom West Germany and Japan in particular began to out-compete it, experiencing more rapid economic growth.

By the end of 1980s the US share of world manufacturing was down to 25 per cent.

The US maintains overwhelming military dominance, spending more than the next eight countries combined.

But the Afghanistan and Iraq wars have also exposed the limits of its military power.

Invading Iraq was supposed to give the US control of the country’s oil reserves and establish a reliable client government.

Instead Iraq’s government is now dominated by Shia sectarian parties allied with Iran. US troops are still in Iraq 15 years on, and the Middle East wars have cost well over $3 trillion.

The key challenges to US power today are from China and Russia.

Despite Trump’s admiration for Russian President Vladimir Putin, and his view that they could work together, the clashes between the two powers continue.

But Russia is essentially a regional power, able to assert itself military on its periphery, in places like Ukraine and Central Asia.

China poses a much more serious threat. Its population and rapid economic growth mean its power could potentially eclipse the US.

On one measure the Chinese economy is already larger than the US’s. Its economy grew at an average of almost 10 per cent annually between 1978 and 2012, compared to US economic growth since 1976 of less than 3 per cent a year.

China’s share of the world economy has rocketed from 2 per cent in 1980 to around 17 per cent today.

As China’s economic power has grown, it has pushed against the arrangements established as result of US dominance of the Pacific since the Second World War.

We have seen this pattern before. The emergence of Germany as a major power in the early 20th century brought it into conflict with the division of the world into rival empires controlled by France and Britain. The result was two world wars.

China’s growing economy has made it much more important as an export market for other countries, particularly in East Asia. Australia and its mining exports are one example.

It is also playing an increasing role as an investor abroad, for instance in Africa, Pakistan and Egypt. According to the UN Committee and Trade and Development, “Chinese companies already own a large part of the FDI [investment] stock in extractive industries in countries such as Kazakhstan and Turkmenistan.”

Its “One Belt, One Road” project is similarly designed to draw countries along its trade routes into a closer relationship with China.

China’s rising economic strength has also encouraged a more assertive military stance, aimed at safeguarding its trade routes and pushing the US navy back from its coastline.

In the South China Sea its construction of military installations on disputed islands has drawn strong protests from the US.

Under President Obama the US responded with a “pivot to Asia”, moving 60 per cent of its naval assets into the region and attempting to encircle China through alliances with its Asian neighbours and India.

During his campaign, Trump promoted an “America first” policy based on abandoning free trade for protectionism.

Trump labelled Chinese trade terms with the US “the greatest theft in the history of the world”, and threatened to impose a 45 per cent tariff on Chinese imports.

Trump did scrap the push for a Trans Pacific Partnership, a free trade deal designed to draw Asian countries closer to the US by offering them access to the US market. But there have been few other concrete moves towards greater protectionism.

He has also flirted with withdrawing from NAFTA, a free trade deal with Canada and Mexico, which he described as the “worst trade deal ever approved in this country”. Instead Trump has decided to renegotiate it, under pressure from US manufacturing, agricultural and other business interests.

His opposition to free trade, and other global deal like the Paris climate Accord, has only isolated Trump on the world stage, for instance at the G20 summit in Berlin.

Nor has Trump’s belligerent America first approach worked in extracting concessions on trade with China.

He has had to recognise his need for China’s help to resolve the stand-off over North Korea. The US has few other options. Even North Korea’s conventional artillery is capable of killing hundreds of thousands of people in the South Korean capital of Seoul within days.

Trump has pursued a more aggressive and unpredictable approach to foreign policy.

But his actions have been remarkably conventional. After suggesting the US should pull out of the Middle East, he has reversed himself and backed an increase in troops in Afghanistan.

In a sense the North Korean crisis works to the US’s advantage, giving it an excuse to build up its military forces surrounding China.

Despite the tensions, a direct military clash between the US and China is unlikely. China’s immediate aims are deterring a US attack by boosting its defensive capabilities.

There is also considerable economic inter-dependence between the two powers. While the US has now run up a large debt to China, China benefits from this because it allows the US to keep buying Chinese products.

The US enjoys other advantages against China, in particular its alliances with Europe and Japan that have allowed it to incorporate the world’s two other major economic powerhouses.

But the decline in US power has opened a greater space for other powers to assert themselves. This applies not just to China but also a host of smaller players.

In Syria powers including Iran, Saudi Arabia and Turkey have all joined the scramble for influence.

Saudi Arabia’s power plays, for instance, have caused problems for its US ally. It has launched a blockade and threats targeting Qatar, host of the largest US airbase in the Middle East.

We now live in a world of increased conflicts and tensions between rival powers.

This means a greater likelihood of wars on the periphery of the great powers, as in Syria, the wider Middle East, and Africa.

The involvement of so many competing actors increases the danger of miscalculations, causing conflicts to spiral beyond what the powers intend. And it can feed and sustain bloody and destructive conflicts like the Syrian war.

The destruction and human misery of war remains hard-wired into capitalism. The only way to put an end to them is to get rid of the system behind them.