How the West creates terrorism 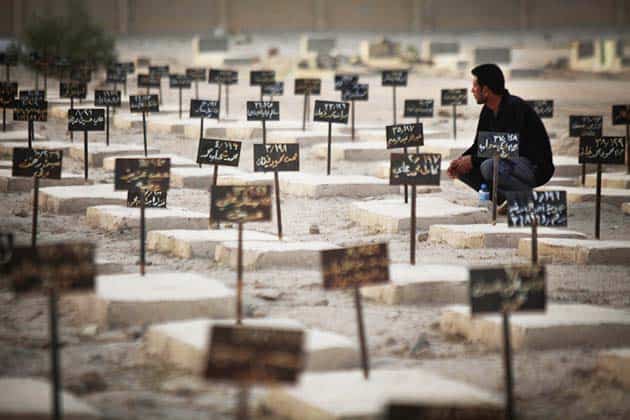 It is not Islam or extremist ideas but the destruction of the Middle East by Western imperialism, and the racism accompanying it, that causes terrorism, argues Miro Sandev.

In the wake of the London bombings and the incident in Melbourne, Turnbull has stepped up his fear mongering about Muslims and Pauline Hanson is calling for an end to Muslim immigration. The calls to “name” Islam as the cause of terror have been growing louder.

Head of spy agency ASIO, Duncan Lewis, parroted the line that has been used by many governments in the war on terror: it is a violent interpretation of Islam that causes terrorism.

Western leaders often say that Islamic terrorists attack us “because of our values” or “who we are” as opposed to anything we do. They try to present the supposedly progressive, democratic values of the West as the target of the backward worldview of the terrorists.

Terror “experts” warn constantly that radicalisation can happen simply by watching the wrong YouTube videos by a Muslim preacher, or going onto the wrong Facebook pages.

But this ignores the fact that most attackers are inspired primarily by wanting to avenge brutal Western wars against Muslim majority nations, as well as the anti-Muslim racism they face at home.

Violent imperialist invasions have always provoked violent reprisals. Robert Pape’s study of every suicide attack carried out between 1980 and 2004 concluded that it was political issues, usually foreign occupations, which were the main motivators for attacks.

This shows there is nothing inherently Islamic or even fundamentalist about suicide attacks in particular, or terrorism in general. Suicide terror attacks have been carried out by Christians, Buddhists and atheists.

A study by Olivier Roy of around 100 Franco-Belgian Muslim terrorists found that none of them were particularly devout in their religion nor had religion played an important part in their “radicalisation”.

Almost all of them had an “ambivalent relationship” to their mosque and many of them had even been expelled from mosques because of their violent attitudes.

Right-wing commentators have tried to play down the role of imperialism in causing terrorism by saying that the 9/11 attacks in the US came prior to the destructive wars in Afghanistan and Iraq.

But the West’s brutal interference in the Middle East has a much longer history.

Western nations colonised and pillaged Egypt and North Africa in the nineteenth century. The French and British carved up the Middle East between them following the fall of the Ottoman Empire after the First World War.

The West also instigated the formation of Israel and the ethnic cleansing of the Palestinians in 1948.

As well as launching its own wars, the West has backed dictators, and funded and trained numerous armed groups. Many of the Islamist groups Western leaders now claim to despise were once funded by the West.

US President Jimmy Carter’s national security advisor, Zbigniew Brzezinski, boasted that in 1979 the CIA secretly started funding and arming the Mujahideen, Islamic insurgents who were fighting the regime in Afghanistan.

Brzezinski hoped to lure the Soviet Union into invading Afghanistan to support the regime, and get them stuck in a drawn out war like the US’s war in Vietnam. This is precisely what happened.

At least half a million civilians died, and the country was left in the grip of rival warlords whose influence continues to this day.

When he was asked if he had any regrets about supporting the Mujahideen, Brzezinski said: “What is more important in world history? Some agitated Muslims or the liberation of Central Europe and the end of the Cold War?”

Some of those “agitated Muslims” went on to destroy the World Trade Centre in 9/11, which George W. Bush then used to justify launching the war on terror.

The person who masterminded the attack, Osama Bin Laden, began his involvement in militant networks during the war in Afghanistan. He formed Al Qaida towards its end, setting it upon the West following the Gulf War in 1991 when the US went to war with Iraq.

This pattern of the West using insurgent groups to do its bidding only to see them turn on their former masters has played out many times.

Some of the Mujahideen fighters involved in Afghanistan were from Libya, and returned home after the war. In 1990 they formed a group dedicated to fighting the dictator Muammar Gaddafi, calling themselves the Libyan Islamic Fighting Group (LIFG).

They were given financial and military support by the UK government to fight Gaddafi, just as the Afghan Mujahideen had been by the US.

This ended briefly in 2004, as part of the war on terror, when UK Prime Minister Tony Blair struck a deal with Gaddafi. UK authorities placed many Libyan exiles on control orders and helped in the rendition of two senior LIFG leaders to Tripoli.

But in 2011, after the popular uprising against Gaddafi, the US, UK and France ordered air strikes against the regime and deployed special forces soldiers in Libya, seeking to take advantage of the situation for their own imperialist aims. The UK facilitated the return of terror suspects including members of the LIFG to Libya to fight Gaddafi.

Authorities returned their confiscated passports to them despite the fact that some of these people had been subjected to counter-terrorism control orders. They were not asked further questions.

Salman Abedi, the man responsible for the terrorist attack in Manchester last month, fought alongside his father in Libya in 2011. His father had been a member of the LIFG.

Yet hardly anyone in the media or political establishment has criticised the UK government over its bloody intervention in Libya or for supporting the LIFG.

When Labour leader Jeremy Corbyn said the war on terror had failed and linked the attacks to Western imperialist wars, he was savaged by the political establishment who called him a “terrorist sympathiser”.

This history underlines the utter hypocrisy of blaming the Islamic religion, migrants or Muslims for terror attacks. Horrific attacks like those in Manchester ultimately come out of the horrors created by Western imperialism and racism.

The US invasion of Iraq in 2003 also played a major role in encouraging terrorism. The US war killed over a million Iraqi civilians and completely destroyed the country.

The jihadist group Islamic State (IS) emerged from the conditions of the brutal US occupation, which encouraged sectarianism between Shia and Sunni Muslims to try and control Iraq and divert the insurgency against American troops.

The creator of IS, Abu Mos’ab al Zarqawi, was a peripheral figure before the invasion of Iraq. Prior to this, Al Qaeda had no influence in the country at all. After the Americans removed Saddam Hussein, Iraq descended into chaos, with widespread looting, kidnapping and violent crime. Al Zarqawi created Al Qaeda in Iraq (the precursor to IS) in the chaotic post-war situation.

The US quickly faced mass popular resistance to the occupation. This had become a full blown armed insurgency by 2004, helped by the fact the US had disbanded the entire Iraqi army, sending hundreds of thousands of unemployed men back to their homes with their weapons.

But the US quickly developed a strategy of dividing the insurgency by consciously inflaming sectarian tensions.

The US was able to buy-off a section of Shia leaders by offering them lucrative positions in the provisional government.

They then carried out counter-insurgency using sectarian Shia militias who terrorised Sunni communities and brutally punished those who continued armed resistance.

This sectarian strife created the perfect conditions for Al Qaeda and Al Zarqawi. His group carried out vicious and indiscriminate terror attacks on Shia communities as well as attacking the occupying forces.

While the US killed Zarqawi, a coalition of army officers from the old Baath dictatorship and veterans of occupation prisons built IS. It then moved into Syria during the turmoil of the uprising and subsequent military conflict.

In 2014 they captured huge swathes of territory across Iraq and Syria and declared a Caliphate.

The West responded by further bombing in Iraq and Syria in their bid to destroy IS. But the bombing only adds to the list of imperialist crimes. The independent site, Air Wars, estimates that civilians killed by coalition bombing in Syria, Iraq and Libya are around 4000.

Western governments reject out of hand any idea that their imperialism is what fundamentally creates the conditions for terrorism.

This means they can only explain the appeal of Islamist extremist groups by using racist stereotypes about Muslims and Islam. The most explicit is the idea that the Islamic religion is inherently prone to violence and extremism.

So there are constant calls for “moderate” Muslim leaders to publicly condemn terror attacks, as though they are responsible for every act by someone who identifies as Muslim. Likewise, Muslims are under pressure to explain how their religion is peaceful and compatible with democracy.

Bogus government “inquiries” have been held into halal food and Islamic schools, so as to incriminate all Muslims.

Teachers are forced to spy on Muslim school children and report them to security services if they spot “signs of radicalisation”. Bigots are mobilised to oppose local council approvals for mosques. All of this puts Muslims under siege.

Even the claim that “extremism” is a misinterpretation of Islam points the finger at Muslims and away from its real cause—the oppression that Muslims face.

The far right has been taking advantage of the Islamophobia of the mainstream parties. Parties like One Nation have taken up the most extreme positions against Muslims. This anti-Muslim hatred that is boosted from the top of society helps fuel the resentment that pushes individuals toward terrorism.

But admitting this does not fit the priorities of Western governments, as they use Islamophobia to justify their brutal wars in the Middle East.

The cycle of wars and terrorism will not end until we stop Western imperialism and the racism against Muslims.