US deal farce as refugees blocked from resettlement 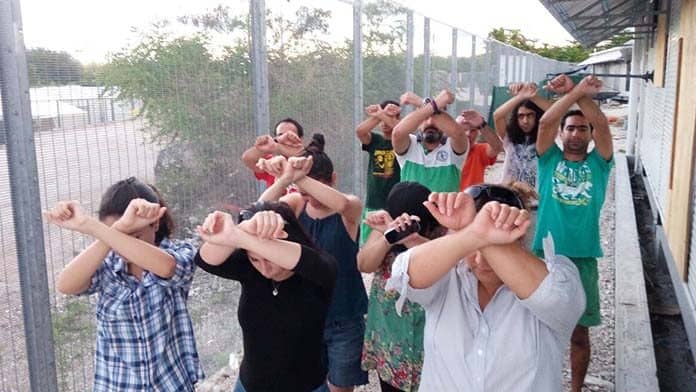 Large-scale rejections on Nauru have revealed the US resettlement deal to be a complete farce.

When US assessors returned to Nauru in May all Iranian, Somali, Sudanese and Iraqi refugees, with the exception of one Iranian single woman, were rejected for US resettlement. These nationalities make up around half of all the refugees on Manus and Nauru. This time around 80 of the 150 Nauru refugees given answers were rejected.

Hundreds of refugees from the same countries on Manus Island now know that they will be rejected by the US too.

Despite the assurances given to Iranians and others that there was no ban on refugees from certain countries, the nationalities of the rejected refugees coincide with the countries named by Trump’s travel ban.

It is now clear that hundreds of people found to be refugees by Australia’s own determination process will be denied resettlement places in the US.

The US deal was never acceptable. It was always a way Australia denied providing protection to those who needed it. And, even if the US deal had been met in full, there were not enough places to resettle the hundreds of asylum seekers who have not yet been given a refugee determination, were found not to be refugees, or who refused to cooperate with the process after being forced to Manus five years ago.

After lying for years that the Coalition government was negotiating with “third countries” to resettle the refugees, Home Affairs Minister Peter Dutton admitted that actually there were no other third countries willing to do so.

Yet the government continues to reject the New Zealand government’s offer to take 150 refugees a year from Manus and Nauru.

Successive governments have brutalised around 2000 people on Manus and Nauru in the attempt to deny them protection in Australia. After almost five years they still have nowhere to resettle them.

The situation on Manus and Nauru is set to get worse. In the aftermath of the rejections, two despairing Iranian refugees on Nauru attempted suicide.

With polls showing that the Coalition faces defeat in the next election, there will be constant attempts by Dutton to play the refugee card over the coming months. When a Sri Lankan boat carrying 130 asylum seekers was intercepted in Malaysia in early May, the media lit up with Dutton warning about people-smuggling, and the “danger” of Labor softening its refugee policies at its conference in July.

While Shorten has said that a Labor government will accept New Zealand’s offer to take 150 refugees, Labor remains completely committed to offshore detention. Shorten has only criticised Turnbull and Dutton for the length of time that refugees have been kept on Nauru and Manus.

He says that Labor is committed to getting all refugees and asylum seekers off the islands, but simply maintains that Labor will find “third countries” to accept them. But Labor won’t find third countries for the same reasons that Dutton can’t find any.

Resettling countries are not going to accept Australia undermining the Refugee Convention and international resettlement agreements with the UNHCR by taking refugees that Australia has turned away in violation of them.

Labor for Refugees and the Labor Left will move resolutions at Labor’s conference to close Manus and Nauru. But there should be no illusions. Shorten will almost certainly have the numbers to keep boat turnbacks and offshore processing in Labor policy.

That’s why “Bring Them Here,” will remain at the forefront of the refugee movement’s demands. The fight won’t end with the election of a Labor government.