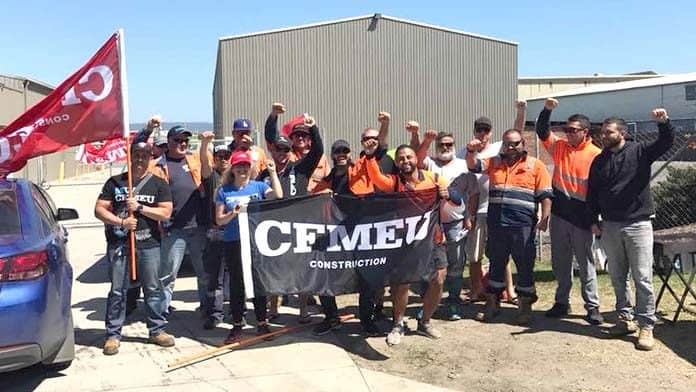 Workers at Boom Logistics cranes in Singleton, Newcastle and Port Kembla were into their fourth week of an indefinite strike as this article was written.

In Singleton and Newcastle, bosses have used casual workers to undermine the strike. Workers at Port Kembla stopped a scab operation early on by forming a hard picket around the yard.

Luke Jewitt, a union delegate in Port Kembla, said casuals at the other yards were threatened with sacking if they refused to work. “To be threatened and bullied like that, and then [the company] have the hide to say we bully is a bit hypocritical,” he said.

Crane hire services are in high demand due to the construction boom. But the workers have not had a pay rise for four years. “At the moment it’s a race to the bottom,” Luke said. “Everyone’s pushing to win all this work so they’re going in cheaper, and the way they’re going cheaper is by pushing wages down.”

The company is offering a 3.5 per cent increase, leaving pay significantly below the industry standard. Management gave themselves pay rises of 25 per cent over the last year.

The union is demanding 5 per cent a year. Workers at Port Kembla are want to be properly compensated for the three out of four weeks they spend working away from home.

Bosses are trying to play the Port Kembla workers off against the other yards by offering them a separate agreement—which they refused.

Alongside workers at WGC cranes, their strike was initially banned by the Fair Work Commission after the CFMEU asked both companies to sign a template agreement with the same wages and conditions agreed to by other crane companies in NSW. This kind of “pattern bargaining” is currently illegal.

Workers were initially banned from striking for three months. On appeal the ban was reduced to two weeks—in exchange for concessions such as dropping a claim for back pay for 2017 at WGC. It’s another example of how the law stops effective strike action—and why the Fair Work Commission needs to be defied.

Darren, a union delegate at WGC cranes in Smeaton Gorge told Solidarity, “Since Freo Cranes bought us out they wanted to pay all the Wollongong workers at a lower rate than they’re paying us at WGC’s Smeaton Grange yard.” The move came after the company was bought by a firm owned by billionaire Warren Buffett. Workers at the company’s two sites have now won the same pay and conditions.

Solidarity from across the union movement can make sure the Boom workers win their fight too.