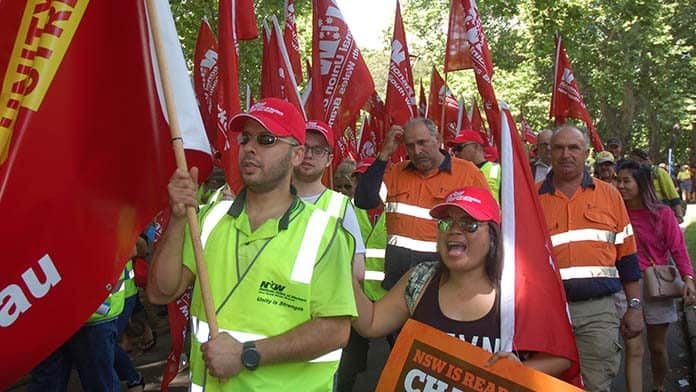 Thousands of unionists walked out of work to join Change the Rules rallies on 23 October in Sydney and Melbourne.

Workers shut down the ports again in both Sydney and Melbourne. Stevedoring companies DP World, Hutchison and Patrick agreed to let the MUA use a clause in their agreement allowing a paid four-hour stopwork meeting to attend.

This time more unions brought sizeable numbers to the Sydney rally of around 4000 people. Construction workers were again out in force. The NUW brought hundreds of union delegates, with the entire permanent workforce at some sites attending.

But Melbourne’s rally dwarfed it, in display of union power as tens of thousands of construction workers walked off building sites.

Workers defied threats from the Fair Work Ombudsman, which wrote to employers reminding them that workers who take unlawful strike action can face individual fines of $12,600.

Victorian Trades Hall responded by threatening a union name and shame-style campaign against any employer who threatened workers attending the protest.

These acts of defiance are crucial. Unions are going to have to openly break the laws that ban industrial action if we are going to change the rules and win the right to strike.

Most unions brought contingents, with migrant farm workers from the NUW again prominent.

But, with the rally timed for a month before the Victorian state election, the focus from the platform was much more narrowly on the elections. Almost every speaker from the stage made reference to what Trades Hall Secretary Luke Hilakari called “a time to make a change… two key elections”, and the chance to re-elect Labor’s Daniel Andrews in Victoria and kick out Scott Morrison in Canberra.

The ETU’s Troy Gray even said, “We need to fix trickle-down economics by fixing our broken workplace laws and every state needs a Premier like Daniel Andrews. Do that and you’d fix the inequality.”

The turnout was far short of the claims it would be Melbourne’s biggest ever rally. Despite official claims of 170,000 attending, the turnout was substantially smaller than the 120,000 who hit the streets in May.

A number of unions have already shifted their focus to electoral campaigning through doorknocking and phone banking, putting less effort into mobilising for the rally. Their aim is to elect a Labor government, in the hope they will deliver change.

But the limits of what Labor leader Bill Shorten is prepared to offer are already clear. Labor is offering modest changes in industrial relations, including an end to the termination of enterprise agreements, scrapping the Australian Building and Construction Commission, limitations on use of labour hire and overturning the cuts to penalty rates.

However they will not even promise to introduce industry-wide bargaining, as the ACTU has proposed, or getting rid of the fines and other restrictions that frustrate strike action.

The union movement cannot afford to simply elect Labor and hope this will solve our problems. Change the Rules needs to be turned into an ongoing campaign of stopwork rallies and protests, to drive the Liberals from power and force Labor to deliver.