Vilifying CFMEU protesters will only build the right 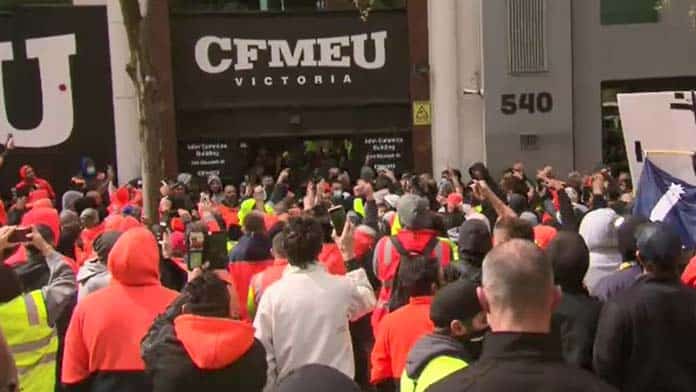 It is very clear now that while there were organised anti-vaxxers and elements of the far right involved, there were hundreds of CFMEU members at the Monday protest outside the Melbourne union office.

CFMEU National Secretary Dave Noonan estimated 40 per cent were union members, while The Age said other “senior union figures” estimated 80 to 90 per cent of the protesters were construction workers. The CFMEU numbers increased around lunchtime after many union members walked off the job over a proposal to work six-hour shifts with no breaks, in response to Andrews’ ban on using on-site lunch rooms.

An eyewitness from Red Flag reported that there were workers from construction sites and companies including, “Elizabeth North commercial development, Paragon’s Queen Street, I&D concrete, SG Formwork, the Metro Tunnel, Image Building Group and others”.

Feelings were running high over a series of issues in construction—from lost shifts due to the lockdown, the ban on smoko sheds, and then an announcement that jobs were on the line with a 23 September deadline for mandatory COVID jabs. (The deadline is now 5 October.)

Workers wanted answers from their union. There were demands for CFMEU State Secretary, John Setka, to lead them to march to state parliament.

But they got no answers.

The next day a number of construction workers joined another large protest, but numbers seriously dwindled at further gatherings during the week. As the ABC’s Norman Hermant reported, “What started with large numbers of angry construction workers has been largely subsumed by anti-vaccination and anti-lockdown activists.” It shows the potential for the far right to grow out of working class discontent and disillusionment.

Therein lies the danger of wrongly labelling and dismissing all of the Monday protesters as anti-vaxxers or anti-union. Such an attitude can only result in more people being pushed into the arms of the organised right.

Surveys by large Melbourne building companies before the protests found the number of actual anti-vaxxers was tiny, with just 1 per cent resisting vaccination and another 11 per cent “still considering the issue”.

The reasons some workers are vaccine-hesitant has got nothing to do with being right-wing extremists. There has been enormous confusion and misinformation around COVID vaccines. This was fuelled by Scott Morrison’s continual changes to advice about who should get the AstraZeneca vaccine, which fed the idea it was unsafe.

Migrant and marginalised communities have higher levels of vaccine hesitancy due to experiences of racism and less access to healthcare, and have greater levels of mistrust in authorities, including health authorities, because of that. Some people are wrongly concerned that they might be more susceptible to adverse reactions to vaccination.

Yet Victorian Secretary of the CFMEU, John Setka, has publicly threatened the jobs of CFMEU members at the protest. Setka told 3AW, “We have identified people … there will be some people who won’t have a job any more … They can go and pick fruit, they won’t be working in the construction industry.”

Indeed The Age reported that one double-vaccinated person with “left-wing views” has already been sacked for attending the Monday protest.

ACTU Secretary Sally McManus has similarly dismissed the Monday protest as being “orchestrated by violent right-wing extremists and anti-vaccination activists”.

McManus told 3AW that ultimately people who refuse to be vaccinated will be sacked. “Employers have to follow public health orders.” She had nothing to say to the workers who face losing their jobs except to see their doctor for advice.

This “do-nothing” attitude displayed by Setka and McManus will mean unions will be weaker and the far right will get more of a hearing from disillusioned workers.

Workers join unions to protect their jobs and conditions from bosses and governments. When the unions refuse to protect them it should not be surprising if they turn to others who falsely claim they are willing to support them.

Even if it is only 5 per cent of the 30,000 workers in the Victorian CFMEU who are ultimately vaccine-hesitant, that equates to 1500 workers who will lose their jobs, and hundreds of others who will be disillusioned in a union that did nothing to defend them.

Dismissing their concerns means hundreds and perhaps thousands are at risk of being pushed into the arms of the far right and anti-vaxxers.

Blaming extremists is an easy way to dismiss the anger of workers who feel they have been abandoned. When workers see union leaders expelling members who dared to ask the union for help, it is a fundamental blow to the most basic solidarity that unions are meant to embrace.

Fighting for workers left behind

So far, the anti-vax protests have been relatively small and the far right is marginal. To keep them that way, the unions and the left have to fight against the conditions—like insecure work and unemployment—that allow them to grow.

It is workers, the poor, the marginalised and the oppressed that have paid the price of the lockdowns. Working class areas of Melbourne in the north and west of the city as well as Dandenong, alongside the working class west and southwest of Sydney, have suffered the highest COVID cases and the worst of racism and police repression. Last year migrant communities in public housing towers in Melbourne had discriminatory hard lockdown conditions imposed.

Melbourne has spent more days in lockdown than almost any city in the world. Construction workers, among others, have lost huge amounts of income.

In 2020, the unions talked about ensuring no one was left behind, but as McManus admitted in the aftermath of the CFMEU protest, “The reality for many people’s lives is economic devastation and deep social dislocation.”

The bosses made a mint from JobKeeper, while essential workers—once called the heroes of the pandemic—have indeed been left behind.

John Setka told ABC TV, “We as a union would like to protest about certain things, but we haven’t been able to since the pandemic started. You have got to give up a few things.” The sad fact is that through the pandemic Setka and McManus have given up on fighting back.

That lack of struggle has created the conditions in which the far right is getting a hearing.

COVID has actually put workers in a stronger position to fight for safe workplaces and to fight all the inequalities exposed by the pandemic. Essential workers in transport, supermarkets, deliveries and the health system have been shown to be vital to keeping society going. This gives them enormous power to fight insecure work, increase wages, and to demand adequate safety and better conditions.

As the handful of examples of workplace safety stoppages show, bosses and government can be forced to capitulate within days. But you wouldn’t know it from most of the unions’ response.

Taking a stand to defend the jobs of anyone threatened by mandatory vaccinations is a good place to start the fight to really make sure no one is left behind by the COVID crisis. Rather than threatening the jobs of construction workers, John Setka and the CFMEU should be defending them.