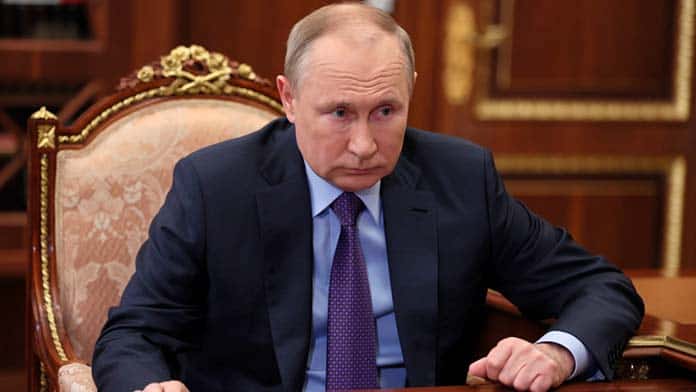 A call-up of 300,000 reservists sparked anti-war protests in 38 cities and towns, including Moscow and St Petersburg, and more than 2000 arrests. It also sparked a mass exodus out of the country by an estimated 194,000 draft-age men.

Previously Putin had promised that only volunteers would be sent to fight. But Russia is clearly running out of troops willing to fight, and likely die, in the war.

Putin threatened the possible use of “tactical” nuclear weapons, saying “all available means” would be used to defend parts of Russian territory from attack.

He also staged votes to annex the provinces of Luhansk, Donetsk, Kherson and Zaporizhzhia, declaring them parts of Russia that he would never give up.

Putin is attempting to raise the stakes and make it clear that he will not accept a Russian defeat. His threats of using nuclear weapons are no mere bluff, with US President Joe Biden saying in early October that the world is closer to nuclear Armageddon than at any other time in the past 60 years.

But as Ukraine continues to win back territory, it has become more belligerent in its talk of taking back all the areas Russia has seized, including Crimea, annexed by Russia in 2014.

Zelensky even called for pre-emptive strikes on Russia to stop it using nuclear weapons, before clarifying that he did not mean a pre-emptive nuclear attack.

Ukrainian success has relied on huge quantities of weapons and funding from the US and NATO.

In mid-September The New York Times revealed the extent of US military involvement in directing Ukrainian operations, reporting that its recent offensive was revised “from its original form after urgent discussions between senior US and Ukrainian officials”.

“General Mark A. Milley, the chair of the [US] Joint Chief of Staff, and senior Ukrainian military leaders regularly discussed intelligence and military support.”

A new US Defense Attache, Brigadier General Garrick Harmon, who arrived in Kyiv in late July, was “holding daily sessions with Ukraine’s top officers” while the Pentagon’s policy chief, Colin Kahl, admitted that the US ran “war games and modelling for Ukraine for their proposed counteroffensive”.

Ukrainian moves, it said, “depended entirely on the size and pace of additional military aid from the United States”.

In early September, the Ukraine Defense Contact Group, hosted by the US Secretary of Defense with 50 countries attending, held its fifth meeting to discuss arms shipments to Ukraine.

At that meeting, General Mark Milley said, “We are seeing real and measurable gains from Ukraine in the use of these [US supplied weapons] systems.”

But he told journalists, “The war is not over. Russia’s a big country. They have very serious ambitions with respect to Ukraine. So sustainment of Ukraine to continue their fight for their survival will be necessary.”

Military officials have discussed how to ramp up arms production in preparation for a war that could last years. So far the US has provided Ukraine with $16 billion in security assistance.

Putin’s moves to escalate the war must be condemned.

But it has become clear that this is an imperialist proxy war where both Russia and the West are locked into fighting a long war in search of a decisive victory, at the cost of thousands more lives and even the risk of nuclear devastation.

The war has already dragged on into its eighth month, with no end in sight.

That makes resistance by workers and soldiers so much more important. The protests inside Russia are crucial to building an anti-war movement that can bring down Putin.

There is also growing dissent among Russian soldiers. Its retreats point to problems including a lack of supplies and poorly trained troops sent into battle.

Moscow’s TASS news and The Guardian reported that mobilised troops in Omsk, western Siberia, are electing spokespersons to complain about conditions and the lack of pay, before they even arrive at the frontlines.

It’s not a long way from discontent to open mutiny in the political hothouse of war.

The Australian government is reportedly preparing a “significant package” of new arms for delivery to Ukraine as well as considering sending Australian soldiers to Ukraine to train Ukrainian troops, which will only further fuel the conflict.

We need opposition to the war both in Russia and in the West to bring an end to the killing.

US sees chance of Russian defeat in Ukraine and ramps up...

The war between Russia and Ukraine continues to drag on with no end in sight.