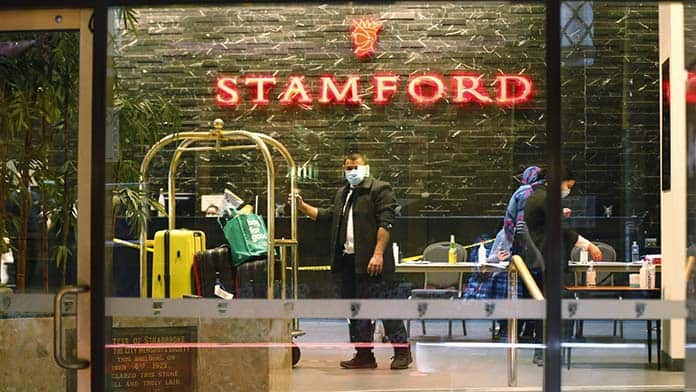 The new wave of infections in Melbourne is the first large-scale community spread of coronavirus Australia has seen. The whole of Melbourne is now back in “stage three lockdown”.

Premier Daniel Andrews claimed the reason the lockdown had to be reintroduced was the “creeping complacency” of people disregarding social distancing.  “We all know someone who has done the wrong thing”, he added.

This is part of a government offensive designed to shift blame onto ordinary people. But it is Andrews’ own failures that are to blame for the spread of the virus.

Victoria’s second wave of COVID-19 has been traced to mistakes at the government-run quarantine hotels. Its Chief Health Officer Brett Sutton has admitted that “every case” it is now seeing likely traces back to lapses at the hotels in late May and early June.

Genomic evidence from virus infections points to hotel security guards as the source.

This is the result of outsourcing the operation of the hotels to private security companies. Some companies even subcontracted the work to other security firms. By contrast NSW stationed police at its quarantine hotels.

Security guards were given as little as five minutes’ training on the health and PPE measures necessary in the hotels, one guard told Nine’s Today show. They were allowed to share lifts with guests in quarantine while escorting them outside for exercise, given inadequate PPE and rostered on for 12-hour shifts.

It has also emerged that MSS Security, which had the contract for the Stamford Plaza hotel, where an outbreak among security guards has grown to 43 cases, also provided security for the North Melbourne and Flemington public housing towers. Industry insiders have claimed that subcontractors for MSS Security worked at both the quarantine hotel and the towers.

This should never have happened. Quarantine facilities should be run directly by government health workers, employed on secure conditions.

An adequate system of testing and contact tracing should have been able to prevent the surge of cases we are now seeing across Melbourne.

“You have fewer people to take the calls coming in, to organise contact tracing, to oversee—and I’m speculating—the set-up of quarantine. That can happen when your workforce is spread thin and you don’t have established expertise.”

The Andrews government has also pointed the finger at large family gatherings as a source of the spread. This is code for migrant communities—and has fed racist efforts to blame them.

The Murdoch press singled out Muslims, blaming one cluster on a family celebration to mark Eid, on the basis of unconfirmed information from a medical centre receptionist. Yet Victoria’s Chief Health Officer has admitted the state government did not put enough effort into communicating with migrant communities.

Well-funded health services able to ensure testing, tracing and isolation of confirmed COVID-19 infections are the key to keeping the pandemic under control.

Organise and fight for safe workplaces

Premier Daniel Andrews has admitted that about 80 per cent of Victoria’s new infections, “are being driven by transmission in workplaces, including private-sector aged care”.

Abattoirs, where workers operate crammed close together in humid conditions, are a particular risk. Sommerville Meats has 95 cases while the JBS Abattoir has 71. Health and aged care workers are also being infected in large numbers, with hundreds in isolation as close contacts.

COVID-19 is a class issue. Essential workers are the most at risk—since they cannot work from home. Workers need to organise at a workplace level to ensure all necessary safety measures are implemented.

The United Workers Union has produced a list of demands on companies where there is a confirmed case of COVID-19, calling for a three-day workplace shutdown to allow a deep clean of the site and testing of all workers, as well as paid pandemic leave.

The union is encouraging members to cease work under health and safety laws where bosses refuse to implement these steps. At two separate food processing companies, workers ceased work in July after the companies refused to do so, and won the demands.

The JBS Abattoir also closed temporarily due to the cluster of cases there, but the company simply stood down its 1230 workers without pay.

In June, Daniel Andrews announced payments of $1500 for anyone required to isolate by the health department, after admitting that casual workers without sick leave had been forced to go into work, potentially spreading the virus. But such a minimum wage payment does not go close to providing the paid pandemic leave unions are calling for.

By Chris Breen and James Supple