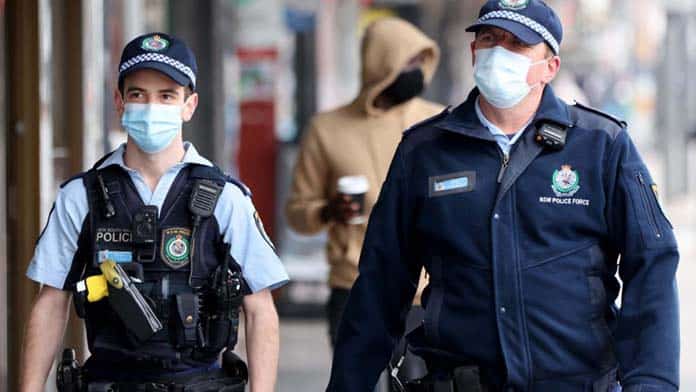 A major police operation is underway in south-west Sydney, as the NSW government looks to scapegoat and punish workers and migrant communities for the current COVID-19 outbreak.

More than 100 extra police have been deployed in the Fairfield, Liverpool and Canterbury-Bankstown areas, including dog-squads, mounted police and helicopters.

This follows a number of days of aggressive “high visibility” police operations in these areas. Premier Gladys Berejiklian pointed the finger at migrant communities directly for not obeying restrictions, addressing communities in the area who she said, “have a similar background to me”, pointing to her Armenian migrant parents.

The double standard is obvious. When the outbreak began spreading in Bondi and the wealthy eastern suburbs, these areas were not targeted with extra police to enforce restrictions.

The government has allowed all retail shops to stay open through this lockdown, including boutique stores. Yet in south-west Sydney police are being stationed outside shopping centres and places such as Kmart, rifling through people’s shopping bags to check if the items they have purchased are “essential”.

Assistant Commissioner Tony Cook said the only test for what is “essential” will be “whether you really need this item today and most often the answer is no”. This leaves huge discretion and power in the hands of police to act on their own prejudices.

For weeks now, both Gladys Berejiklian and Chief Health Officer (CHO) Kerry Chant have encouraged people to get outside for fresh air and exercise, where there is far less risk of contracting COVID than indoors. NSW Health have even told the media that not a single case of outdoor transmission has been recorded in NSW through the whole pandemic.

Despite this, police are combing through parks and other outdoor areas demanding to know if people have a “reasonable excuse” for being outside.

More than $600,000 in fines have been issued in the past 10 days. Analysis of data on the fining regime during the 2020 lockdown showed clearly there was a disproportionate targeting of suburbs with high migrant and Indigenous populations in both Melbourne and Sydney.

These police operations have nothing to do with addressing genuine risks of COVID transmission. They are about demonising and intimidating poor and marginalised communities to take attention off the catastrophic failures of policy that are driving the current outbreak.

There has been pointed criticism of the police operation from community leaders in western Sydney, with Labor MP Jihad Dib saying that police efforts to “strong-arm the community” would cause panic and fear.

NSW Health is obviously concerned that current low rates of COVID testing in western Sydney are masking even greater levels of transmission. Money currently being spent on police intimidation and harassment needs to be urgently redeployed to a community health response that rolls out testing capacity, vaccination and financial support for people to stay home.

Eighteen months into the pandemic there should be no need for lockdowns at all. It is government failure to vaccinate people and implement proper safety precautions that are responsible for the current mess. This Sydney outbreak began with the infection of an unvaccinated front line transport worker, dealing with international travellers without proper PPE.

The lockdown provisions initially announced two weeks ago have caused extensive hardship for workers. Where businesses have shut, casual workers have been stood down or not given shifts. The measly emergency payment on offer from the Commonwealth—and only after a week with no work—is difficult to access and doesn’t even cover rent for much of Sydney. Casual workers who have lost more than 20 hours’ work are eligible for $500 while those who’ve lost less receive $325 a week.

Without JobKeeper or extra JobSeeker payments, many people face destitution.

The lack of support for workers to stay home when they are sick is directly responsible for the current spread. Berejiklian has drawn on the same racist tropes that Dan Andrews did in 2020, blaming supposedly uncaring or ignorant migrant families for transmission in western Sydney.

“It’s not that people in these LGAs are not behaving as well… the issue is there are a lot of essential workers there so they’re going to work, picking up the virus and bringing it home”.

Whereas almost 40 per cent of residents in Woolarah in Eastern Sydney identify as “professionals” or “managers”, jobs where people can often easily work from home, in Fairfield the number is only 8 per cent.

Precarious workers living pay check to pay check often do not have the luxury of missing work if they are mildly symptomatic, or getting tested and risking extended isolation and lack of income.

NSW CHO Kerry Chant has stressed at press conferences that “all employers and businesses will be very understanding if you need to have a test and stay home”.

This is not the reality on the ground, where bosses constantly pressure casual workers not to miss shifts. The NSW government itself employs many thousands of casual workers, and their “understanding” still doesn’t extend to actually providing paid leave to get tested.

Today, further restrictions were announced for NSW, forbidding travel outside 10km from people’s homes and outdoor exercise with more than one other person. This has no basis in the actual risk of outdoor exercise or patterns of current transmission. It is simply theatre intended to show the government is “locking down harder”.

But the NSW government cannot police their way out of this crisis. Financial support for people to stay home, door to door information and testing, proper PPE and health and safety regulations in workplaces, and massively increased levels of vaccination are needed to stop the virus spreading.