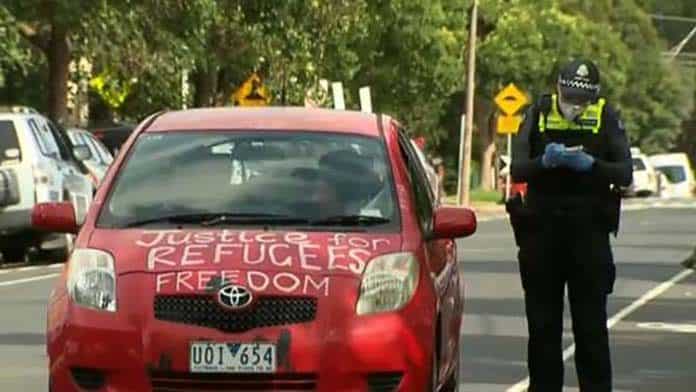 On Friday Solidarity’s Chris Breen was arrested for helping to organise a car cavalcade protest past the Mantra Hotel in Preston, Melbourne.

“I have been charged with ‘incitement’ and police have seized my phone and all my computers (including my 15-year-old son’s computer),” Chris explained.

“I am proud to be inciting support for refugees, our protest was safe, detention is not. I and the wider refugee movement will not be intimidated and will not stop acting in solidarity with refugees.”

Activists from the Refugee Action Collective organised the protest to call for the release of the 70 refugees held in detention at the Mantra hotel, where they are at high risk of coronavirus infection.

Refugee activist Lucy Honan, who was part of the convoy, told Solidarity, “Up to 40 activists in cars and on bikes blared our horns up Bell Street and around the Mantra, and made it loud and clear to the refugees and the media that we were not intimidated by the huge police presence.

“Neighbours came out to their front lawns to take photos and show support. Our cars were covered with our message: ‘health care not detention’, ‘stop the racism, free the refugees’.”

The refugees there are among those brought from Manus and Nauru to access medical treatment, and have been in detention for almost seven years.

Police intercepted cars and told protesters they would receive fines in the mail. According to police a total of 26 people were fined $1652 each for leaving home without a valid excuse—a total of almost $43,000 in fines—despite ensuring the protest was entirely safe, with activists confined to their cars together with other members of their households only.

“The police operation was a hypocritical, organised attempt to use health powers to squash dissent and protest,” Lucy said.

It is an appalling attack on the right to protest that must be firmly resisted.

“This obviously has much wider implications for the unions and social movements”, Chris said. “A United Workers Union convoy of 30 cars was not treated in the same way on Thursday, despite a police presence—but what happens to union protest in future is now an open question.”

“We cannot be complacent that things will bounce back to normal in a few months. We will need safe ways to publicly protest. Health rules around coronavirus can’t be used to stamp out the right to protest.”

“The hypocrisy is staggering,” he pointed out, “people can drive to Bunnings, or JB Hi-Fi, or to get a hair cut, and in Victoria it is still legal to drive to a holiday home, but we can’t drive around the block to highlight the lack of safety for vulnerable refugees with underlying health conditions.

“The most odious hypocrisy is with the unsafe conditions in detention themselves. Premier Daniel Andrews has had not one word to say about the conditions for refugees in Scott Morrison’s detention centres, which are the equivalent of cruise ships on land—a health risk for refugees and for all of us.”

As Moz, one of the refugees detained in the Mantra, put it, “If the rules are for everyone why don’t police fine and arrest Serco officers at Mantra. It’s hypocrisy.” From their Facebook page “Manus to Mantra” the refugees inside thanked the protesters, calling them, “brave and courageous… to come and show us your support despite restrictions, we are really sorry that you guys get arrested and fined”.

“The police came to my house around 12 noon, so I did not even get to attend the protest,” Chris said.

“In my house there were six police in total, none of whom practiced social distancing (staying 1.5 metres away) either with myself or with each other.”

Refugee Action Collective activists have vowed to challenge the fines in court.

They deserve everyone’s support. We need to campaign to drop the charges and drop the fines, and to free all the refugees.

Chris faces court on 6 August. Refugee Action Collective has started a crowdfunding appeal for legal costs, you can donate here.

Sign the online petition to support the protest here