Editorial: Morrison’s failure to stop the virus the result of a sick system 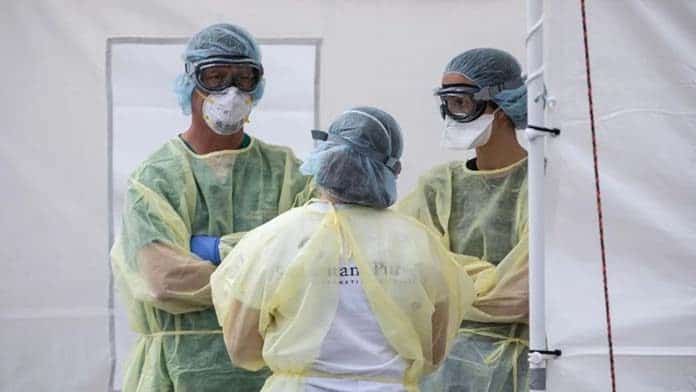 The coronavirus pandemic could see 150,000 people in Australia die in a “worst case scenario” if it spreads unchecked.

He claimed the reason the measures were needed was that ordinary people were not heeding “social distancing”, saying that, “we can’t have the confidence” it “will be followed to the level of compliance that we require”.

Morrison is trying to blame ordinary people. But he has introduced the closures because the government has been too slow to properly test and to prepare hospitals and now the number of coronavirus cases is growing dangerously.

It’s Scott Morrison himself who is to blame.

The countries that have managed to contain the virus like South Korea, Taiwan and Singapore have relied on widespread testing that delivered rapid results, in order to find and isolate anyone infected. But health services here have restricted the tests due to shortages.

Hospitals and healthcare urgently need money and resources. Experience elsewhere suggests 5 per cent of those infected will require ventilation in intensive care. Serious outbreaks in places like Italy are overwhelming hospital resources.

Instead Morrison’s focus has been on travel bans, border closures and bans on gatherings. These are now being enforced with draconian fines by state governments of up to $20,000 for individuals.

The first travel ban indiscriminately targeted anyone from China. This fuelled racist attacks.

And even as the border closures were tightened, it didn’t stop the virus spreading here.

The government is now preparing for drastic lockdowns as they desperately try to “flatten the curve.”

The forced closures have meant tens of thousands in hospitality and retail lost their jobs overnight. Casuals at universities have been sacked. Already 280,000 people have registered with Centrelink.

But workers should not be the ones to pay to contain the virus.

Morrison has temporarily doubled Centrelink payments, but this will still leave many workers struggling to pay mortgages, rent and household bills. And the increase won’t come for five weeks.

The government and big employers should guarantee workers paid leave at their existing wage if they close workplaces, catch the virus or are forced to self-isolate. There are 3.3 million casual workers, almost one-third of the workforce, without any paid sick leave.

And as schools close, parents will also need paid leave to look after their kids.

Organising sizeable demonstrations or meetings will be difficult in the coming weeks, with many people working from home or social distancing.

Sydney Uni management announced casuals would get 14 days’ paid leave, after the union organised a large members’ meeting and called a rally.

At Melbourne Uni, 100 casual staff held a protest outside the administration. The next day the university announced casuals would be paid if they get sick or have to isolate. But neither is offering to pay casual staff they no longer require after moving classes online.

Where workplaces are still operating—including from home—unions need to keep meeting and organising.

We have to fight to make sure every workplace is as safe as possible, with extra cleaning, hygiene measures and efforts at social distancing. NSW school cleaners have won a deal for the next three months for guaranteed, regular cleaning shifts, even if the school closes, as well as a 25 per cent increase in cleaning times paid at double time.

The pandemic has graphically exposed the priorities of capitalism. A society run in the interests of human need—and people’s health—would mobilise all of society’s resources to produce the life-saving ventilators, tests, masks and protective equipment that are needed.

China alerted the world to the outbreak on 31 December. Australia’s first case was recorded on 25 January—two months ago—yet the government dithered on producing the tests needed to control the spread. So far one NSW company, ResMed, has indicated that it could help to produce more ventilators. But that should have started weeks ago.

The ideology of the free market has crippled the response that could have contained the virus. It was only the horror at the number of deaths that drove Spain to put private hospitals under government control. Italy has nationalised the Alitalia airline out of desperation. In the US, the governor of New York State has called on Trump to nationalise the purchase of dangerously scarce medical gear like masks, gowns, and ventilators.

Yet Morrison is providing billions for the bosses while the hospital system looms closer to calamity.

Indonesia and The Philippines shows every sign of facing a catastrophe. Of the 58 deaths in Indonesia some are dying in the street, nine are doctors. Some medical staff are using raincoats as the only protective equipment they have. Meanwhile, it is reported that Trump is scouring Asia for supplies. Such is global capitalism.

It is a sick system. We are going to have to fight for the health care that can contain the coronavirus and save lives. The system will take more casualties as it plunges into economic crisis. We need to fight for a socialist society where the needs of ordinary people come before profit. The future depends on it.