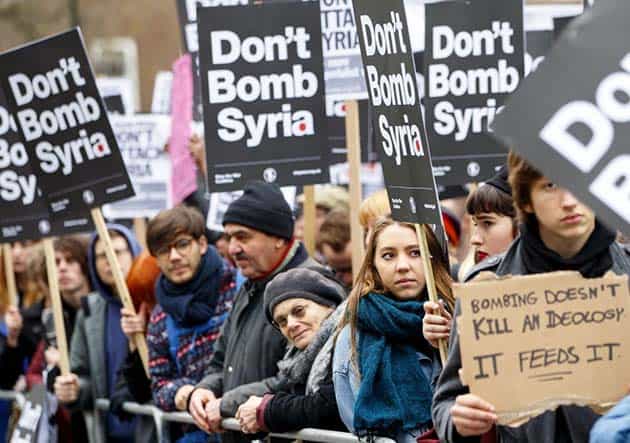 French President Francois Hollande called the attacks in Paris an “act of war”. Within days, France responded by bombing Raqqa, the so-called capital of Islamic State (IS) in Syria. There will be more to follow, with France moving its only aircraft carrier, which Hollande boasted would “triple our capacity to take action”, to the region.

His push to ramp up the bombing of IS in Syria has received backing from both the US and Russia. British Prime Minister David Cameron pushed a vote through parliament to allow the UK to join the bombing too.

Australia has already been bombing Syria since September. In all 13 foreign countries are now involved in military operations in Syria. But more bombing will achieve nothing but further chaos and bloodshed.

The dangers of increased foreign intervention were graphically exposed when Turkey shot down a Russian warplane in November. Syria has become a battleground between the rival imperialist powers. Russia, Turkey, the US and the Gulf states are all backing different factions within Syria. Greater foreign intervention creates the potential for the war escalating further out of control, even into clashes between the major powers.

Islamic State is a brutal and reactionary organisation. Many people hope outside intervention might be a way to weaken it.

But Western bombs will not “destroy” Islamic State. US intelligence sources estimate it has the same number of soldiers now as it did when the bombing campaign began a year ago. This is despite claims that between 15,000 and 20,000 fighters have been killed.

More Western bombing can only increase the anger and resentment against imperialism and drive more people towards IS.

In August, a team of independent journalists established that the US alone has been responsible for 457 civilian deaths in Iraq and Syria in the last year, including over 100 children.

Islamic State first emerged as a consequence of the US invasion of Iraq in 2003. The war devastated Iraqi society, with over one million deaths, and left in place a Shia sectarian regime that repressed and alienated Iraq’s Sunnis.

Despite IS’s brutal practices, some Sunnis still see it as better than the alternative. One Iraqi from Ramadi told journalist Patrick Cockburn in June, “although they are living under bombs, Isis is far better than the Shia militia and the Iraqi army.”

Lydia Wilson, after interviewing captured IS soldiers for The Nation magazine, describes them as, “children of the occupation… filled with rage against America and their own government”.

“Isis is the first group since the crushed Al Qaeda to offer these humiliated and enraged young men a way to defend their dignity, family, and tribe.”

Even the US and Russia now talk of a “political solution” to Syria’s civil war as the answer. But given the growing acceptance among the powers that Bashar Al-Assad’s regime will remain in place, this is unlikely to solve anything.

So what is the answer? Only the revival of the mass movements of the Arab Spring can provide a strong enough social force to counter Islamic State and pose an alternative both to the Arab regimes and to the sectarian divisions across the region.

The initial revolution in Syria had an anti-sectarian character, as it united opponents of Assad’s regime in a fight for democracy. The Egyptian revolution in 2011 united Christians and Muslims in Tahrir square.

Strikes and mass demonstrations against poverty and economic inequality have the potential to unite the Arab working class across ethnic and sectarian divides.

We should oppose Australia and other foreign governments bombing Syria. Stopping Western intervention will help create space for the movements that need to emerge.