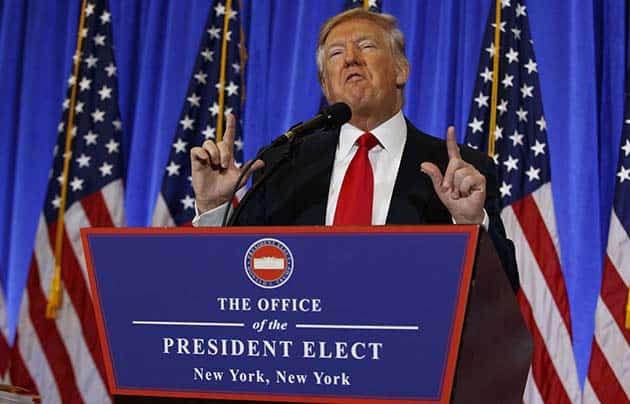 Donald Trump’s preparation for office has been laced with a series of threats aimed at China and the US’s NATO allies, underlining the uncertainty his election has injected into global politics.

At his boastful and at times bizarre press conference just before he took office, Trump even blamed US intelligence agencies for leaking a document detailing rumours about his ties to Russia.

He even likened his own intelligence agents to Nazis.

The intelligence brief alleges direct co-operation between Russia and Trump’s campaign, and the existence of compromising material on Trump allowing Russia to blackmail him.

While there may be doubts about the details, it is clear that many within the US foreign policy establishment and the ruling class are extremely concerned about Trump’s ties with Russia and his praise for Russian leader Putin.

Russia has effectively annexed Crimea, and Russia sidelined the US in Syria with its massive military and barbaric targeting of hospitals and civilian areas.

The US is not really concerned with interfering in elections. The US has routinely interfered in elections and its invasion of Iraq shattered an entire society, leaving over a million dead and entrenching sectarian divisions.

Their concern is with Russia as an imperial rival for influence and control of areas along Russia’s borders in Eastern Europe and Central Asia.

Trump’s apparent benign view of Russia, as a country the US can co-operate with, is at odds with the long-running US view of Russia as a competitor.

In the years since the end of the Cold War, the US has expanded NATO into areas of Eastern Europe formally part of the Russian sphere of influence, and it recently increased its number of troops in Poland.

Trump says his main military priority is to “get tough” on Islamic State, and has suggested that military co-ordination with Russia, for instance in Syria, might aid this.

More risky, perhaps, is his hawkish and arrogant language aimed at China.

First there was Trump’s phone call with Taiwan’s Prime Minister, designed to enrage the Chinese government. Since 1979, when the US officially recognised the Communist Party rulers as the government of China, it ended official diplomatic recognition of Taiwan.

This is known as the “One China” policy, and Trump has since reasserted that he now considers it again under question.

Then Rex Tillerson, his nominee for Secretary of State, threatened China over its island construction in the South China Sea during his confirmation hearings, saying, “access to those islands … is not going to be allowed”. China’s state owned Global Times responded by warning this risks a “large-scale war”.

Since 2015 there has been a stand-off between the two powers over China’s activities in the South China Sea, on a number of islands it claims as Chinese territory.

While the Obama administration has insisted on “freedom of navigation” in order to justify the US’s ability to sail wherever it pleases in the area, it has never tried to physically prevent China accessing islands that are under Chinese claim. Doing so would require the use of US military force. Trump could try to pressure China by increasing military sales to Taiwan.

In 2011 President Obama announced a “pivot to Asia”, shifting the weight of US military resources towards the Asia-Pacific, with the aim of containing China.

The US fears that China is on the way to becoming a second superpower, capable of rivalling the US in both military and economic power.

China is now the world’s second largest economy in GDP terms and growing at a much faster pace than the US.

Trump has promised a massive increase in military spending, to boost both the size of the navy and the army, aimed largely at China.

In addition, Trump’s incoming Secretary of Defence, George Matthis, has a long-standing obsession with Iran.

When Matthis was asked for his view on priorities as newly appointed commander of US forces in the Middle East in 2010, he replied, “Number one Iran. Number two Iran. Number three Iran”.

Matthis’ aim in the Middle East is not necessary war on Iran, but a more aggressive approach aimed at forcing it into line.

So while he singled out Iran as the, “biggest destabilizing force in the Middle East” he also told the US Senate the country should “keep its word” over the deal on Iran’s nuclear program.

This is at odds with Trump’s talk of tearing up the deal.

But Trump’s hostility towards China is also fuelled by the belief that is out-competing the US economically. He has accused China of manipulating its currency in order to harm US exports.

Part of Trump’s aggressive nationalism is his claim that US foreign policy is not delivering enough direct benefits to the US economy. He has denounced free trade deals like NAFTA and the Trans-Pacific Partnership as “bad deals” for the US.

And he has complained that US allies “don’t pay a fair share” of the cost of hosting US troops or relying on US protection, suggesting he could downgrade the importance of NATO.

He seems to view threats and a more confrontational military stance as a way to boost the US’s declining economic role and force other countries to give the US what it wants and exact some sort of bargain over trade.

But military brinkmanship also risks miscalculations that could lead to armed conflict.

Australia is already involved alongside the US in military adventures in Iraq and Syria. The US military base at Pine Gap is used extensively for operations in the Middle East, and is sure to be involved in any conflict in the South China Sea as well.

The need to end the US alliance and kick out the US bases is now clearer than ever. The Trump presidency means the world has become an even more dangerous and unpredictable place.