Defy the law to defend penalty rates and fight Turnbull 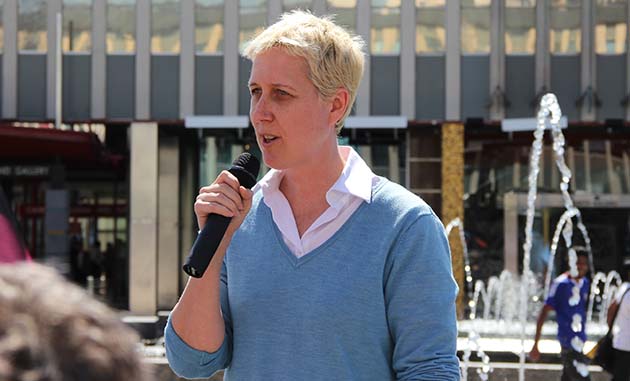 New ACTU leader Sally McManus gave heart to unionists everywhere when she told the ABC that workers were right to break unfair laws.

The Liberals and the mainstream media have gone ballistic. While other union leaders and The Greens supported McManus, to their shame Bill Shorten and Labor distanced themselves, saying workers should try to change laws rather than break them.

But breaking anti-union laws is exactly what we will we need to do to stop the attack on penalty rates, scrap the Australian Building and Construction Commission (ABCC) and win basic union rights.

The cut to penalty rates, backed by Malcolm Turnbull, is a threat to workers everywhere. If the bosses can get away with reducing penalty rates in retail and hospitality, they will come after workers in other industries.

There is outrage at Turnbull for refusing to overturn the cuts. Labor and The Greens are both promising to change the laws, but the federal election is two years away.

We can’t wait to vote the Liberals out at the next election. The anger at Turnbull needs to be turned into action that can stop the cuts.

Unions NSW have agreed in principle to hold a combined unions delegates’ meeting, following a call from the NSW CFMEU construction division Committee of Management.

The NSW lead needs to be taken up in every state and by the ACTU.

Combined unions delegates’ meetings can bring together activists from across the union movement to organise a response. National mass stopwork protests like those held during the Your Rights at Work campaign against John Howard’s WorkChoices should be the first step in a campaign.

There needs to be a united union campaign to target any employer, in whatever industry, that tries to take away penalty rates.

The combined unions delegates’ meeting needs to happen soon. The penalty rate cuts are scheduled to begin being phased in from July.

The fight to defend penalty rates will also need to be fought workplace by workplace, industry by industry, in enterprise bargaining negotiations with individual companies. It will require strikes and industrial action at a workplace level to protect our pay.

But the mass union stopwork rallies are crucial in bringing the whole union movement together, to build confidence and take the fight to Turnbull. They will give strength to union activists in workplaces where union strength is weaker and can even draw unorganised workers into the fight.

Sally McManus’s comments about breaking unjust laws were immediately focused on defending the CFMEU, and their right to defy the law and take industrial action. Construction unions are first in the firing line of Turnbull’s attack on unions with the re-introduction of the ABCC.

But her words, “It shouldn’t be so hard for workers in our country to be able to take industrial action when they need to”, apply to all unions. The restrictions on the right to strike maintained in the mis-named “Fair Work Act” that Labor introduced in 2009 are designed to make effective strike action almost impossible.

We need to bring together the issues of penalty rates, the ABCC and the right to strike and insist that the union movement will keep fighting any government, including a future Labor government, unless the ABCC and all the anti-union laws are scrapped.

Racism and the right

The Western Australia election has been a setback for Turnbull and for One Nation. Ironically both were damaged by the preference swapping deal between them. Yet Turnbull won’t rule out future deals.

Opinion polls were predicting big gains for One Nation but it failed to get the upper house balance of power (although it won two seats), or win any lower house seats. But we can’t be complacent. One Nation still polled 8.1 per cent in the upper house.

To push Hanson back, we need to take on the racism coming from Turnbull and the Liberal Party.

It is the Liberals’ willingness to play political footsie with Hanson that is giving One Nation legitimacy. And Turnbull’s move to amend section 18C of the Racial Discrimination Act is just his latest move to keep the racists happy.

We can’t rely on Labor to take up the fight for refugee rights or against Islamophobia. It remains committed to offshore detention and boat turnbacks.

The unions campaigned in WA to expose Pauline Hanson’s support for penalty rate cuts, but its own campaign propaganda about jobs was tainted by racism scapegoating foreign workers on 457 visas for the state’s high unemployment levels.

To effectively fight Turnbull and the bosses, we need to link the fight against racism with the fight to scrap the ABCC and the attempt to cut penalty rates.

That means building big union contingents for the Palm Sunday rallies and going all out to build a grassroots industrial campaign to beat the anti-union laws and the attack on penalty rates.