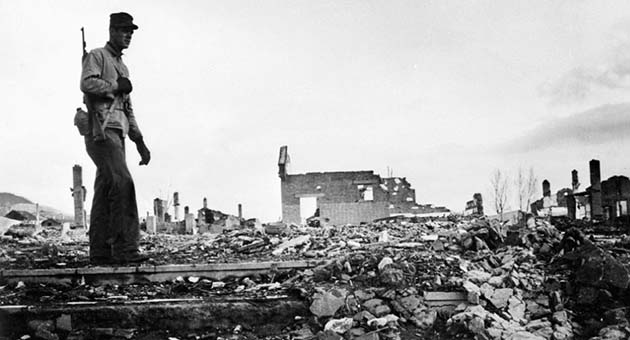 The Korean war involved an unbelievable level of destruction and death, writes James Supple, and North Korea remains caught up in the game of imperialist rivalry

Last month US President Donald Trump told the UN he was prepared to “totally destroy” North Korea. This was just the latest in a succession of threats against the regime. The prospect of a war between the two countries involving nuclear weapons has horrified the world.

North Korea has also talked tough, staging a series of missile tests seeking to develop the capacity to hit targets in the US. Its leader Kim Jong-un is often painted as evil or irrational. But his regime has good reason to fear the US military.

The US has remained officially at war with North Korea ever since the Korean War began in 1950. A formal peace agreement has never been signed.

The war brought death and destruction on an unbelievable scale. In three years at least three million people were killed, half of them civilians. Ten per cent of the country’s population died.

At the end of the Second World War the world was divided into rival “spheres of influence” between the two superpowers, the US and Russia. This carve up was agreed at the Yalta conference in early 1945.

Russian troops had already entered Korea from the north when the Japanese surrendered in August 1945. The US hurriedly drew a line through the country at the 38th parallel, dividing the country between itself and Russia.

Russian troops stayed until 1948 to establish a regime in the north led by former guerrilla leader Kim Il Sung.

The US installed Syngman Rhee, who had lived in exile in the US for the last 37 years, in the south. He set up a dictatorship based on wealthy landowners and former Japanese military officers.

The government broke up the committees and launched a reign of terror, killing 100,000 of its own people even before the outbreak of war.

The Cold War had begun. Both superpowers were anxious to avoid an all-out confrontation, which now risked a nuclear exchange.

But both Korean leaders wanted to seize control of the whole country. Syngman Rhee threatened to invade the North a number of times, and there were several exchanges across the border. But in 1950 the North launched a major offensive, rapidly capturing Seoul and taking control of most of the South.

At first this had an element of a war of national liberation, as peasant guerrillas in the South rose up against their landlords and the South Korean government.

But it quickly became a conflict between the superpowers. The US was anxious to prevent another country moving into the Soviet bloc, following the loss of China the previous year with Mao’s victory in the Chinese civil war.

With Russia boycotting the Security Council at the time, the US was able to fight under the banner of the UN.

Enormous numbers of US troops, over one million in the course of the war, poured into Korea. They were supported by 17,000 Australian and 14,000 British troops, as well as small contingents from other US allies.

By October 1950 the North Korean army had been effectively defeated, and the US captured their capital Pyongyang.

Then China sent hundreds of thousands of troops, with the approval of Russia, pushing the US back into South Korean territory. By the middle of 1951 the war was a stalemate, with both sides back virtually where the war had started. It dragged on a further two years before a truce agreement was struck.

The US controlled the air for most of the war, carpet bombing cities and civilian areas without challenge. US bombing flattened every major city in the North. The US air force estimated that the damage was worse than in German and Japanese cities firebombed during the Second World War.

They also tested out a terrible new weapon: napalm. More napalm was dropped on Korea than during the Vietnam War.

Guardian newspaper correspondent Rene Cutforth described its effects: “In front of us a curious figure was standing a little crouched, legs straddled, arms held out from his sides.

“He had no eyes, and the whole of his body, nearly all of which was visible through tatters of burnt rags, was covered with a hard black crust speckled with yellow pus…

“He had to stand because he was no longer covered with a skin, but with a crust-like crackling which broke easily.”

The US came close to using nuclear weapons several times. In 1951 President Truman signed an order authorising a nuclear strike if China escalated the war by sending in more troops. Later lone B-29 bombers were sent over the North on simulated nuclear bombing runs.

At the end of the war the US bombed hydroelectric and irrigation dams, washing away whole villages and destroying 75 per cent of the country’s rice supplies.

Despite the cease-fire in 1953, the war never really ended. Although the terms of the armistice prevented the US from bringing nuclear weapons onto Korean soil, in 1958 they began placing hundreds of nuclear missiles, bombs and artillery shells there.

They were not removed until 1991, but by then the US had the ability to launch nuclear strikes anywhere in North Korea from well offshore.

The US still maintains 28,500 troops in South Korea today.

North Korea is a state capitalist country that has never had anything to do with real socialism. It channelled the country’s energy into weapons and military spending. With 1.2 million active personnel it still has the fourth largest army in the world.

A personality cult was established around the country’s leader and his successors. The regime is effectively a monarchy with current leader Kim Jong Un the grandson of North Korea’s founding leader.

At the end of the Cold War North Korea lost its Russian sponsor, just as its own economy was running into trouble.

The loss of fuel subsidies saw electricity production crash to just 40 per cent of 1990 levels by 1999. This meant it was unable to produce fertilisers, crippling agricultural production and resulting in a decade of famine. At least half a million people died.

Since the 1990s the country has been isolated and in desperate need of aid. So it began to sound out South Korea and the US about normalising relations and ending US trade sanctions.

When the US responded aggressively, re-targeting some of its nuclear weapons against North Korea and demanding inspections of its nuclear power plants, the regime announced that it would withdraw from the Nuclear Non-Proliferation Treaty.

This crisis was defused through talks between the US and North Korea in 1994. A deal was struck where the US agreed to build new nuclear reactors, with less capacity to produce plutonium for nuclear weapons, and deliver shipments of fuel oil while they were under construction. In exchange the North agreed to suspend its nuclear weapons program.

The US also agreed to move towards ending all trade sanctions against North Korea and normalising relations.

But the US reneged on the deal, with fuel shipments continually delayed and the two new reactors never built. Then in 2002, George W Bush declared North Korea part of an “axis of evil”, together with Iraq and Iran. This was part of the build up to the US invasion of Iraq. It was not hard for the North Koreans to conclude they were next.

The regime has probably now decided it needs nuclear weapons as deterrence against a US attack. However North Korea already has the capacity to kill hundreds of thousands in the South Korean capital of Seoul within minutes. Just 55 kilometres from the border, Seoul is within range of hundreds of hidden pieces of artillery and cannons.

This makes any US attack far too costly, even for someone like Donald Trump.

As recently as June, North Korea offered to freeze missile and nuclear tests in exchange for a halt to US military exercises in the area. But the US continues to demand unilateral concessions from the North as a pre-condition for talks.

North Korea remains caught up in the game of imperialist rivalries, in particular the growing tensions between China and the US.

Since the North’s crisis in the early 1990s, the US has held out hope the regime will simply collapse. It wants to squeeze North Korea through pressuring China and Russia to agree to tougher sanctions.

This has had some success, with China, the North’s main trading partner, agreeing to cap oil exports and restrict other trade.

But the last thing China wants is a regime collapse that results in US troops on its border and hundreds of thousands of refugees moving into its territory.

The US benefits from keeping the conflict boiling, as justification for a military build-up in China’s region, and maintaining military bases in South Korea and Japan.

China has voiced alarm, since its radars also allow the US to keep tabs on Chinese missile launches too.

North Korean missiles fired over Japan help bolster war hawks in the Japanese government who want to build up Japan’s armed forces to face off against China. This only aids the US’s efforts to encircle China.

As tensions between the US and China ratchet up we can expect more crises like the one over North Korea. It is ordinary people in North and South Korea, and across the whole region, who will bear the cost of these imperialist power games.